We were at home in Devon last weekend celebrating Mr Birdie’s grandparent’s diamond wedding anniversary – what an achievement! Whilst there we also visited his other grandparents (who celebrated their diamond wedding anniversary earlier this year!) who gave us some homegrown carrots and beetroot. I decided that I wanted to give baking something with the beetroot a go. Of course baking with vegetables is nothing new – carrot cake is a staple on many tea room and cafe menus. I’ve seen recipes for cakes using parsnips, bread using potatoes and tried making a chocolate and courgette cake a couple of years ago.

A few years ago there was a programme on Channel 4 called ‘Cook Yourself Thin’ which aimed to reproduce recipes but with a lot less fat and fewer calories. One of the recipes that caught my eye from the programme was a recipe for a chocolate and beetroot cake. I decided that this was the direction I wanted to take. I did consider making a chocolate and beetroot cake but decided that some beetroot brownies might be easier to make and easier to give away to people. After some searching on the Internet I decided upon this recipe from the BBC Good Food website. You will need a 20 x 30cm traybake or small roasting tin and some rubber gloves!

When I took my brownies out of the oven they looked very purple and seemed to have quite a flaky skin on them (you can’t tell this in the photo because of the flash). Over the last 24 hours they become more ‘brownie looking’ and quite sticky and moist (in fact maybe a bit too moist!) I took them into school this morning where they were deemed a success however Mr Birdie has just had one for dessert and declared that he was not a fan! They definitely have an earthy aftertaste (which I have to say before I had one I wasn’t sure I wasn’t going to be too keen on but was pleasantly surprised after tasting one) but they taste chocolaty and contain less fat than a normal brownie. Method:
1) Wearing a pair of rubber gloves (to stop your hands from staining), top, tail and peel the beetroot so you have about 400g flesh. Roughly chop and put it into a large bowl. Add a splash of water, cover with cling film, then microwave on High for 12 mins or until tender (If you don’t have a microwave boil the whole, unpeeled beetroot until tender, then peel and use as above or alternatively use 400g of ready-cooked beetroot). 2) Heat your oven to 180C/160C fan/Gas 4. While the beetroot cooks, butter then line a 20 x 30cm traybake or small roasting tin. Roughly chop the chocolate and cut the butter into cubes.
3) Tip the cooked beetroot into a sieve, drain off any excess liquid, then put into a food processor or blender with the chocolate, butter and vanilla. Whizz until the mix is as smooth as you can get it. The chocolate and butter will melt as you do this. 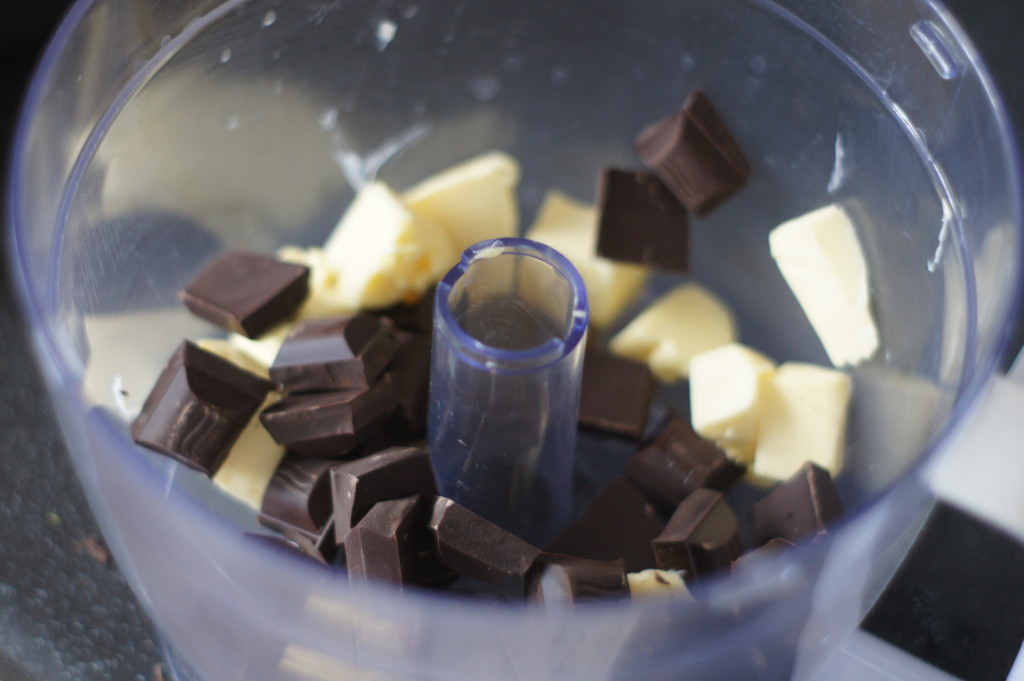 Place the chopped chocolate and butter in a food processor 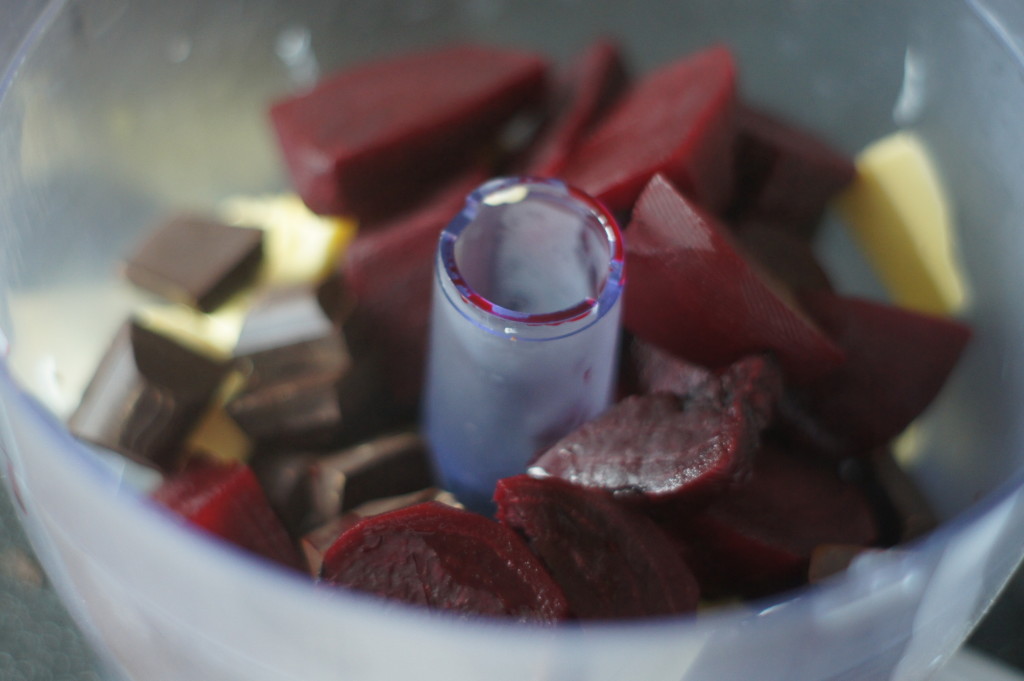 4) Put the sugar and eggs into a large bowl, then beat using an electric hand whisk until thick, pale and foamy (this will take about 2 minutes). Spoon the beetroot mix into the bowl (it will look a bit strange at this point, but don’t worry!), then use a large metal spoon to fold it into the whisked eggs (Try to conserve as much air in the mixture as you can). Sift in the flour and cocoa powder, then gently fold these in to make a smooth batter. 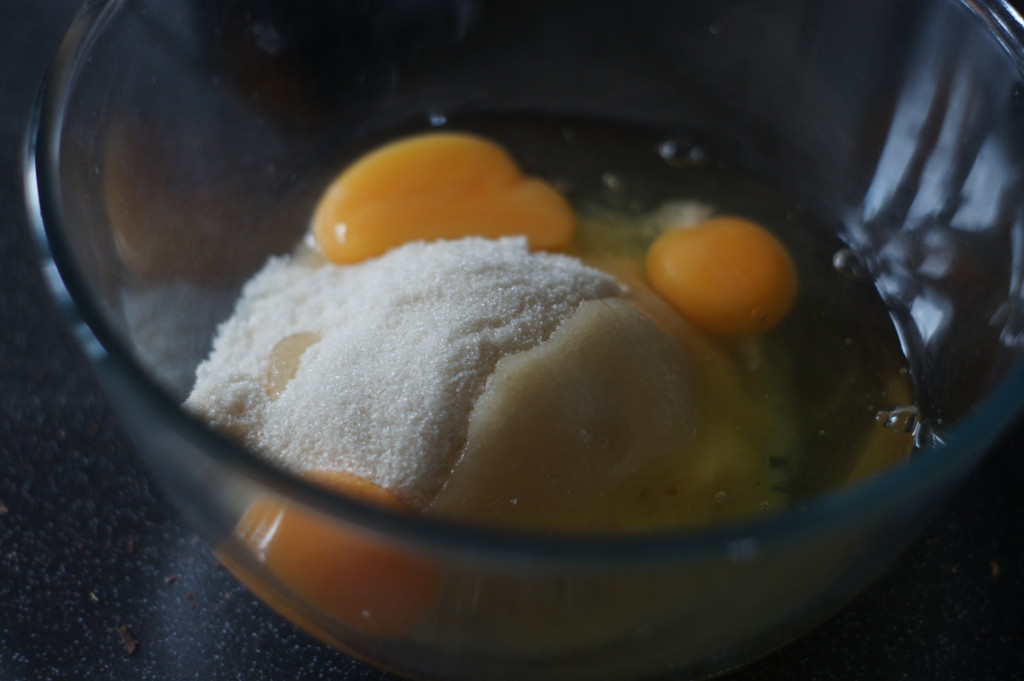 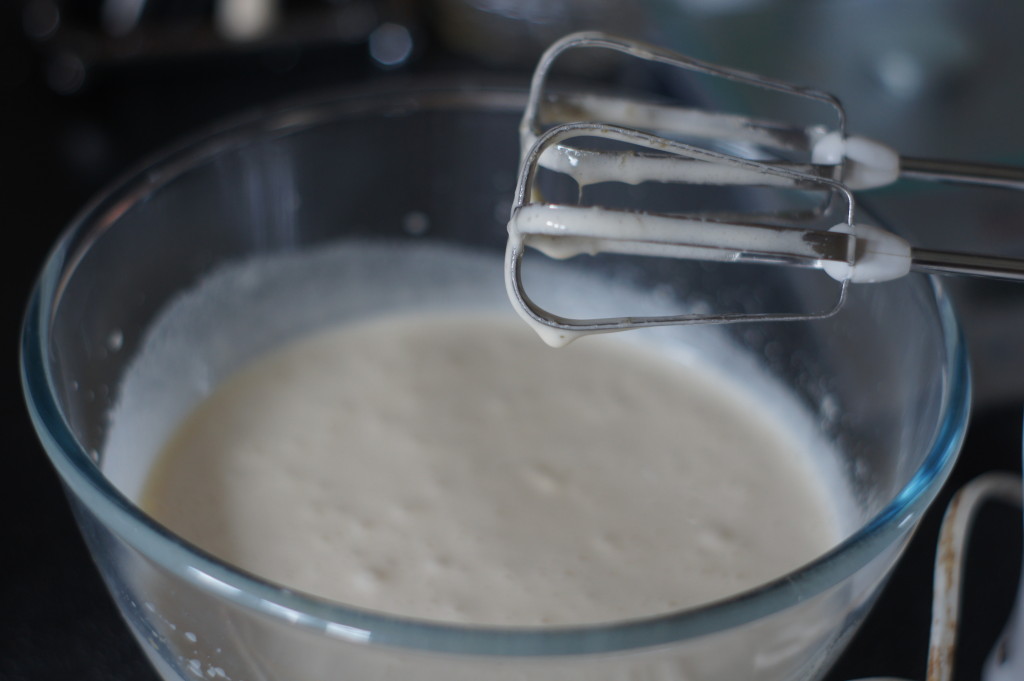 Whisk the eggs and sugar until pale and foamy 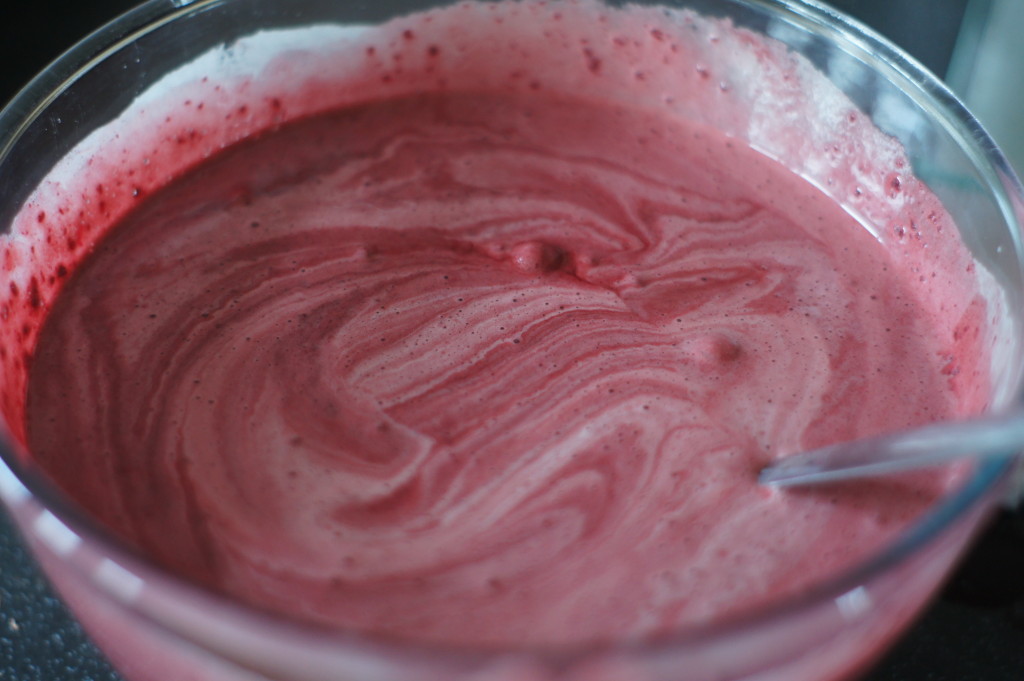 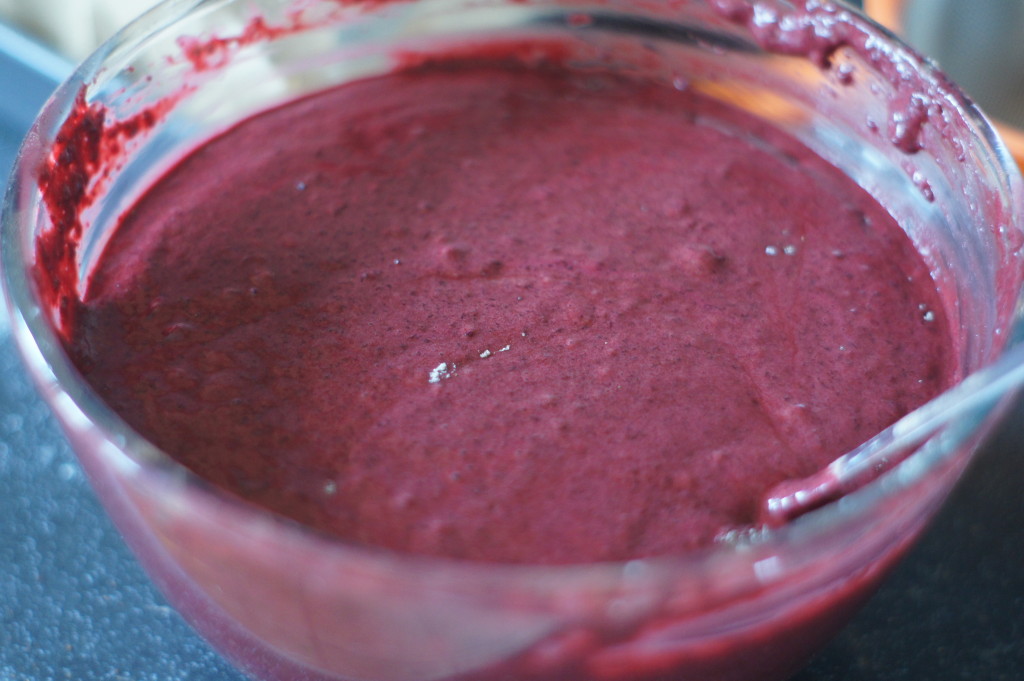 Add the flour and cocoa powder

5) Pour into the prepared tin and bake for 25 minutes or until risen all over, with a slight quiver under the centre of the crust when you shake the tin.

6) Cool completely in the tin, then cut into squares. 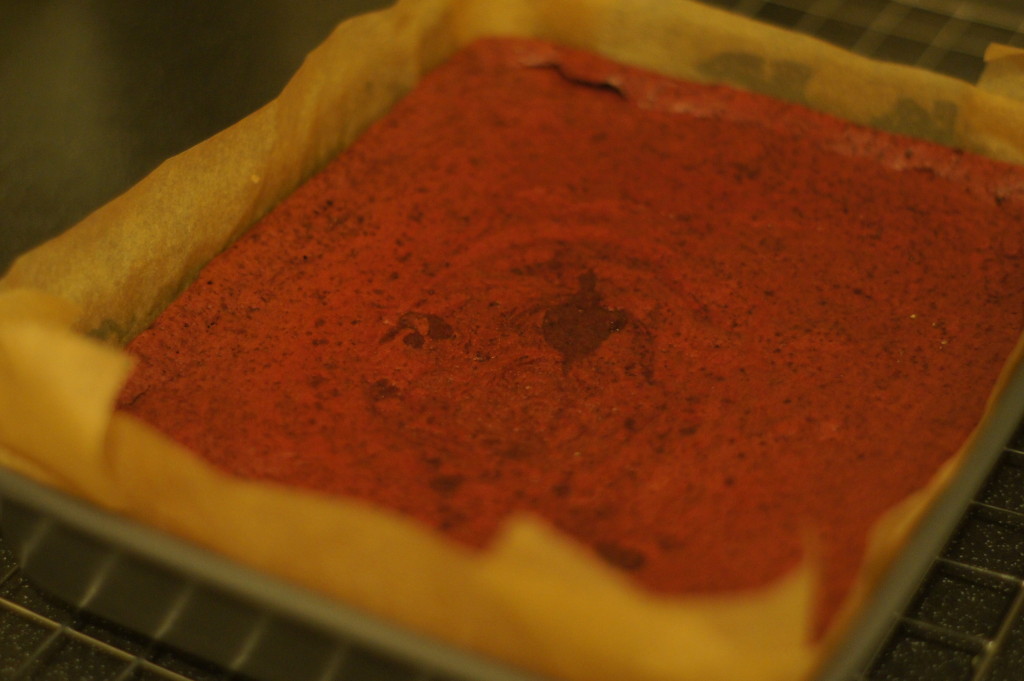 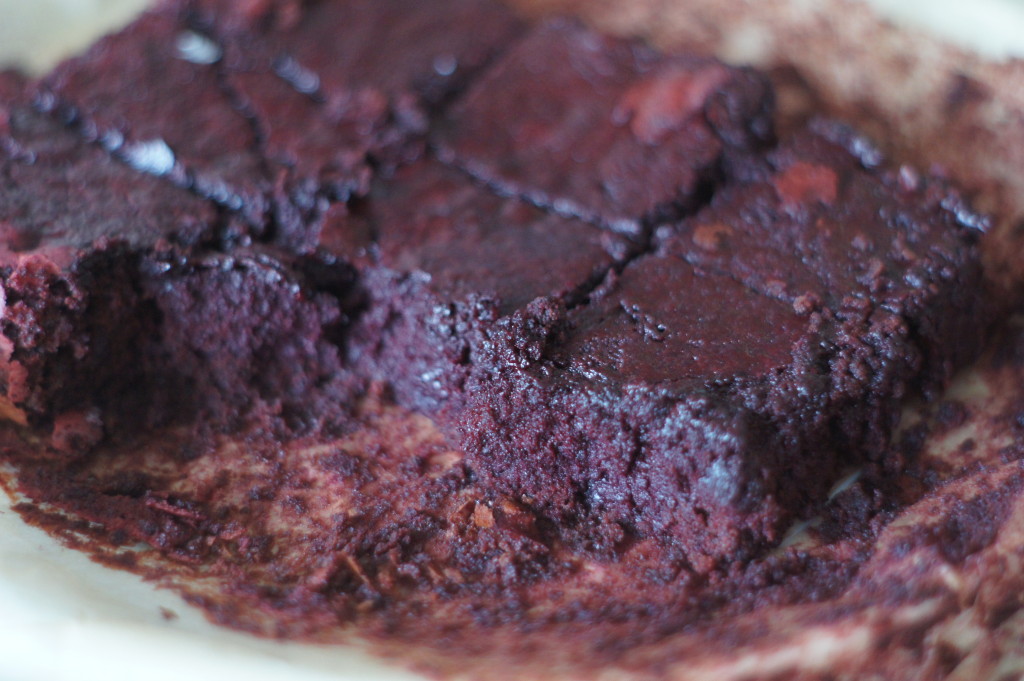