Somehow I am now the proud Mummy to two five year olds. The last five years seem to have passed by in a bit of a blur. For the last two years, yellow, strawberry sprinkle cakes have been requested (with an added Cinderella last year). Now that they are not so little and their personalities shine through this was the first year that two separate cakes were requested. A koala cake and a mermaid cake to be specific. Mr Birdie did at one point suggest combining the two together but it was decided we would have a chocolate koala cake and a vanilla mermaid cake. After a lot of research and scouring of Pinterest for ideas I had a vague idea in my head of what I was going to do.

This isn’t one of my usual step by step method posts. I did start with the best of intentions of photographing every step but to be honest, the whole weekend became a bit of a blur of baking and party preparation and in the end I just wanted the cakes finished so I could go to sleep in preparation for two excited five year olds and their first proper birthday party. I used my go to birthday cake recipes from Jo Wheatley’s A Passion For Baking. I have used these recipes before when making Minion birthday cakes (chocolate) and a campervan cake (vanilla) and always find them to be easy to make, reliable and most importantly delicious! I needed to make one and a half times the recipe to make the cakes slightly bigger.

For the koala cake I used 3 20cm sponges. I found this how to guide I found on Pinterest really useful in getting a basic idea of what to do. After filling the cake with chocolate buttercream and then crumb coating the cake with buttercream I used coloured buttercream icing to give the cake it’s final layer. It wasn’t perfectly smooth (despite my best efforts) – this is still my nemesis but luckily the fondant features helped to cover this! I used Sugerflair’s Shadow Grey food colouring paste to colour the icing. For the nose, mouth and eyes I used ready dyed black fondant icing which I shaped by hand and an ice cream cone, covered in different coloured strips of fondant icing to make the party hat. Flowers were also requested so I used some flower and leaf cutters to make some decorative fondant flowers. I used circular cookie cutters to make 2 ears, which I ruffled the edges of with a fork and then attached to 2 bamboo skewers to make the ears. With hindsight I wish I had made the ears 24 hours earlier to allow them to dry out a little as they were a bit floppy! 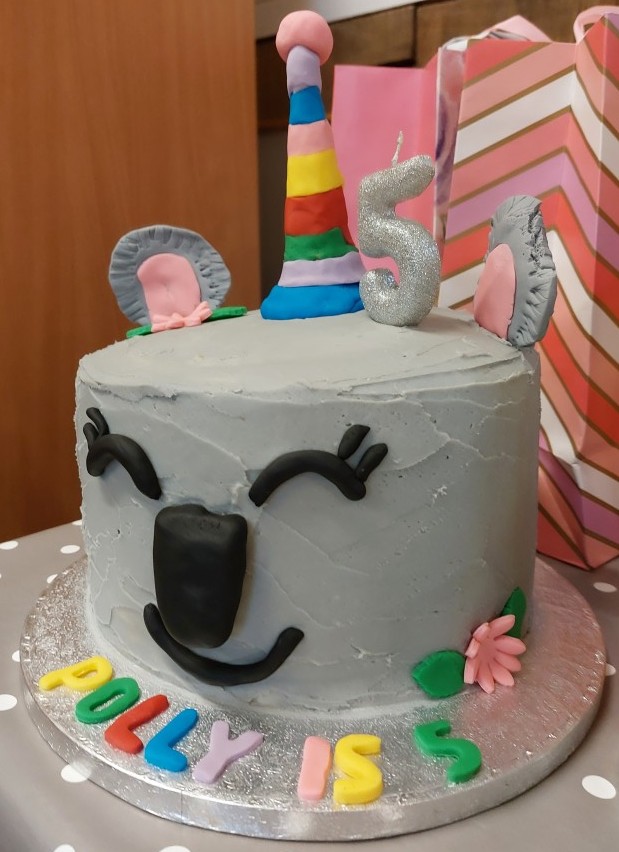 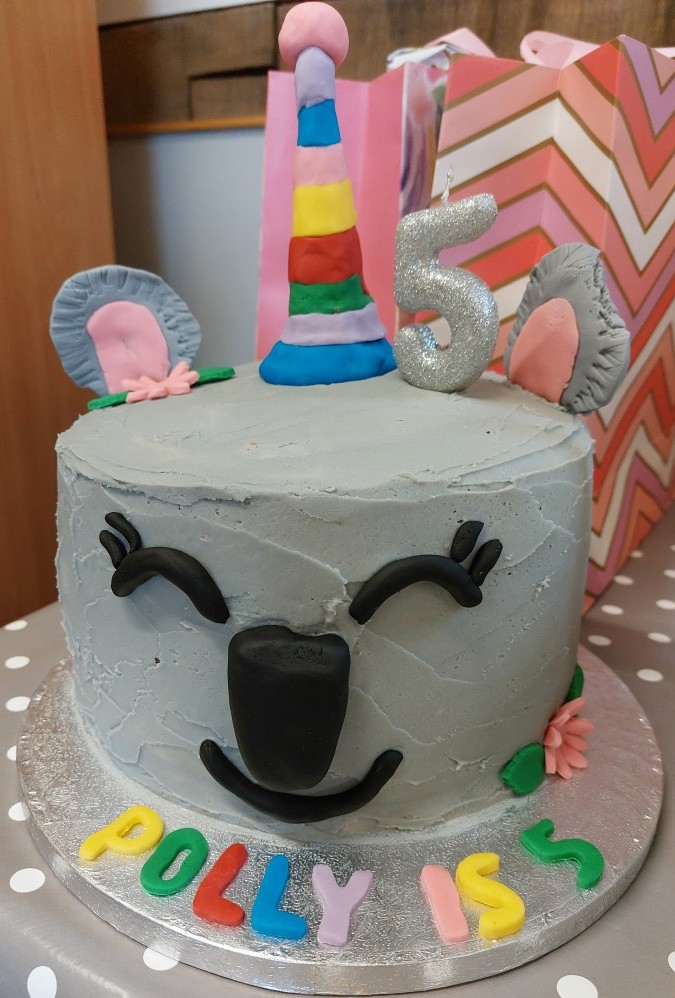 The mermaid cake had to be ‘perfect’. Both the girls have recently become keen on watching Junior Bake Off on Channel 4 and they had seen a mermaid cake on their recently, which they thought was amazing, so the stakes were high! At first I thought about using a card cut out for the name and age and looked on Etsy but whilst looking I found this set of sugar decorations which you could get personalised which I preferred. I also wanted to add some other decorations so bought this set as well as I liked the seahorses that were included. I used 3 6 inch vanilla sponges which after levelling I filled with buttercream and crumb coated. I knew I wanted to use different colours for the icing to try and achieve an ombre style effect. I used Sugerflair’s Rose, Aqua and Lavender food colouring pastes to dye three separate bowls of buttercream which I then attempted to blend together. After adding the sugar decorations (I used some photos in the reviews of the decorations on Etsy to help) I was eventually finished. 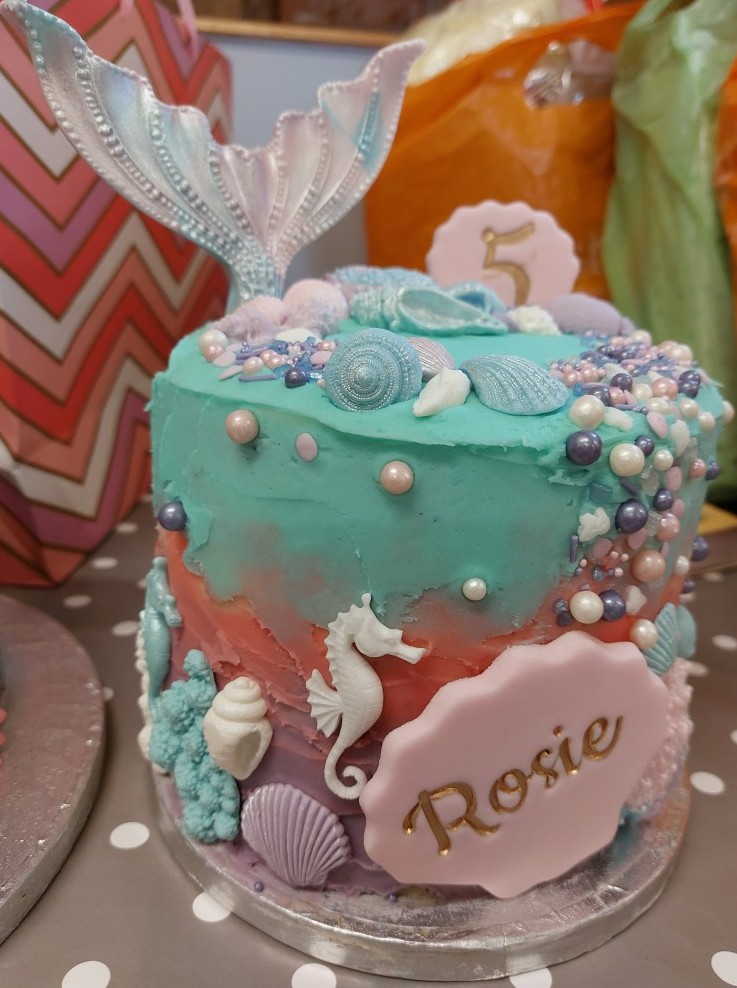 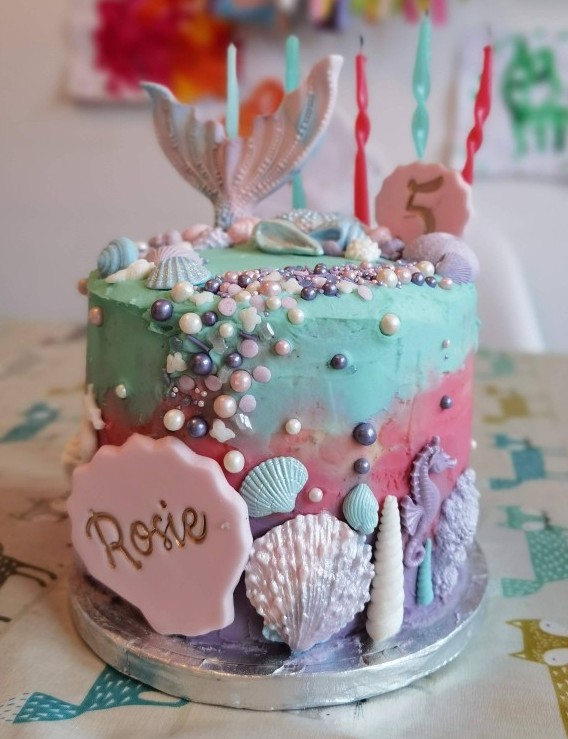 The big reveal was a success with the mermaid cake in particular being declared ‘amazing’. Both cakes received lots of lovely comments at the party and the girls gave me ten out of ten which as a Mum is all you can ask for!

Plans are already in the making for next year with a kangaroo and a Mulan cake being suggested at the moment so it’s time to hit Pinterest again!