Time flies when you’re having fun. Somehow it is 14 years since I finished my maths and music degree at university. I was lucky at university to end up living with, being on the same course as and joining the same choir as some lovely people and I am even luckier that we are still in touch and try to meet up as often as life will allow us. In the last year our group has expanded considerably with the addition of four babies so it was high time we had a gathering to introduce the new additions and catch up on everyone’s news. I had planned on making a raspberry meringue cake but when we got to Aldi yesterday rapsberries were £2.79 and lemons were 49p so the decision was made that lemon meringue cake would be the cheaper option!

This is a Nigella recipe that I spotted years ago and have been meaning to make. It’s actually relatively easy to make as you don’t need to cook the sponge and meringue separately. Funnily enough I made another meringue cake when we had a previous gathering. You’ll need two 21cm sandwich tins (I used 20cm tins and it was fine). I baked the sponges the night before and filled them just before they were needed as the filling uses fresh cream.

Method:
1) Preheat your oven to gas mark 6/200°C/400ºF. Line and butter two 21cm (8 inch) sandwich tins.
2) Mix the egg yolks, 100g of the sugar, the butter, flour, cornflour, baking powder, bicarbonate of soda and lemon zest in a processor or in a bowl using an electric hand mixer. Add the lemon juice and milk and process again. 3) Divide the mixture between your prepared tins. (You might think at this point that you don’t have enough mixture to cover the bottom of the tins, but don’t panic you do). Spread with a rubber spatula until smooth. 4) Whisk the egg whites and cream of tartar until peaks form and then slowly whisk in the remaining 200g of sugar. Divide the whisked whites between the two sponge-filled tins, spreading the meringue straight on top of the cake batter. 5) Smooth one the meringue covered sponges flat with a metal spatula, and with the back of a spoon, peak the other and sprinkle 1 teaspoon sugar over the peaks. Put the tins into the oven for 20-25 minutes. 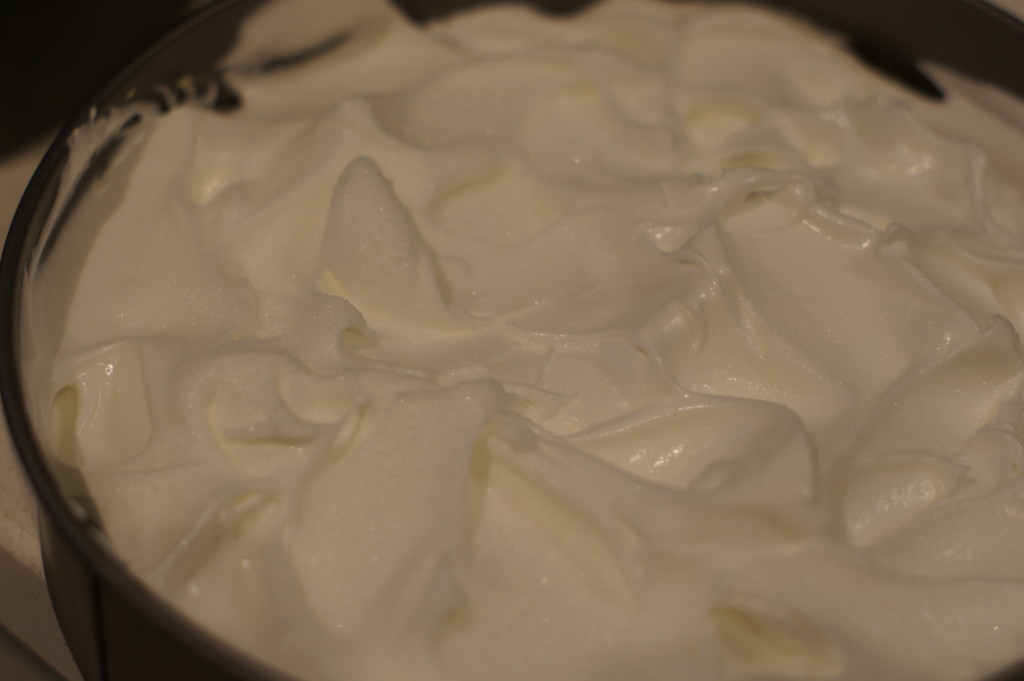 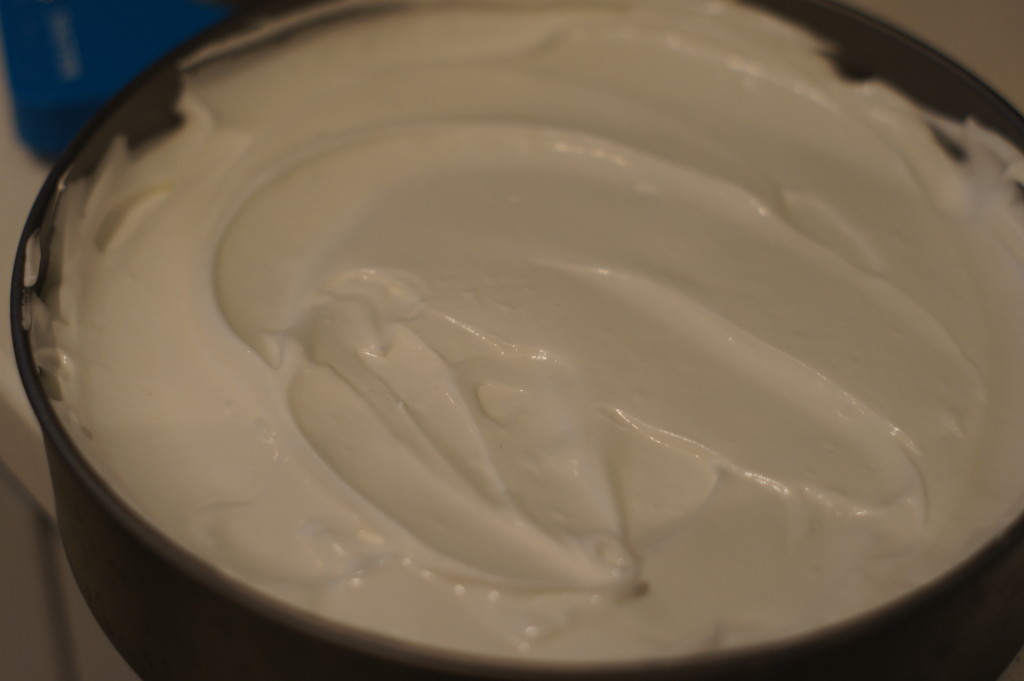 6) With a cake-tester, pierce the cake that has the flat meringue topping to check it’s cooked all through. (It will have risen now but will fall back flattish later.) No sponge mixture should stick to the tester. Remove both cakes to a wire rack and let cool completely in the tins. 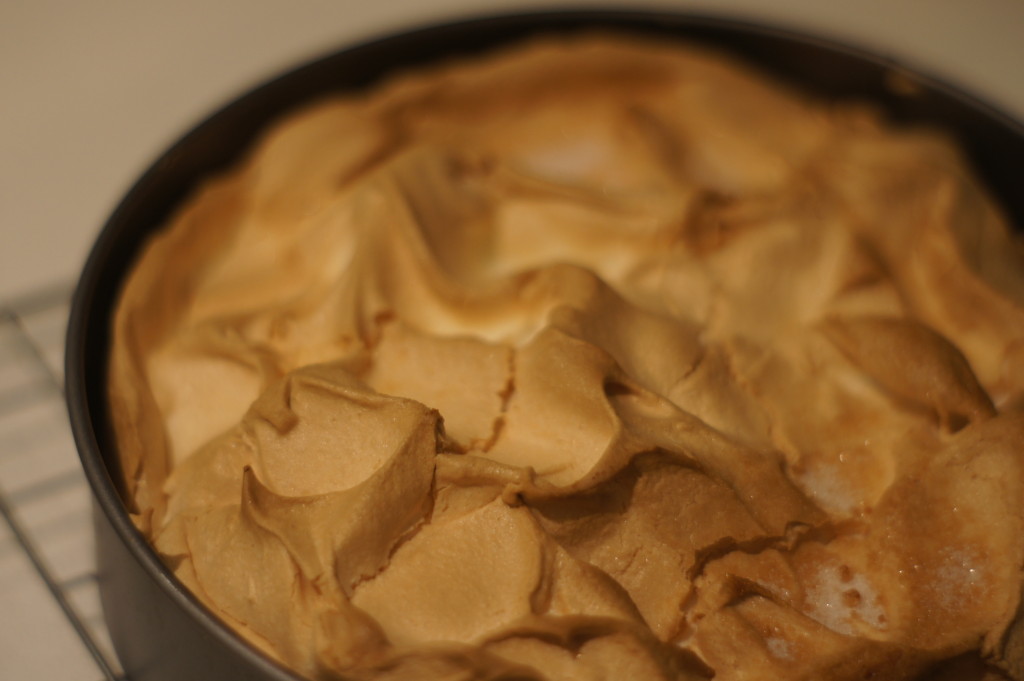 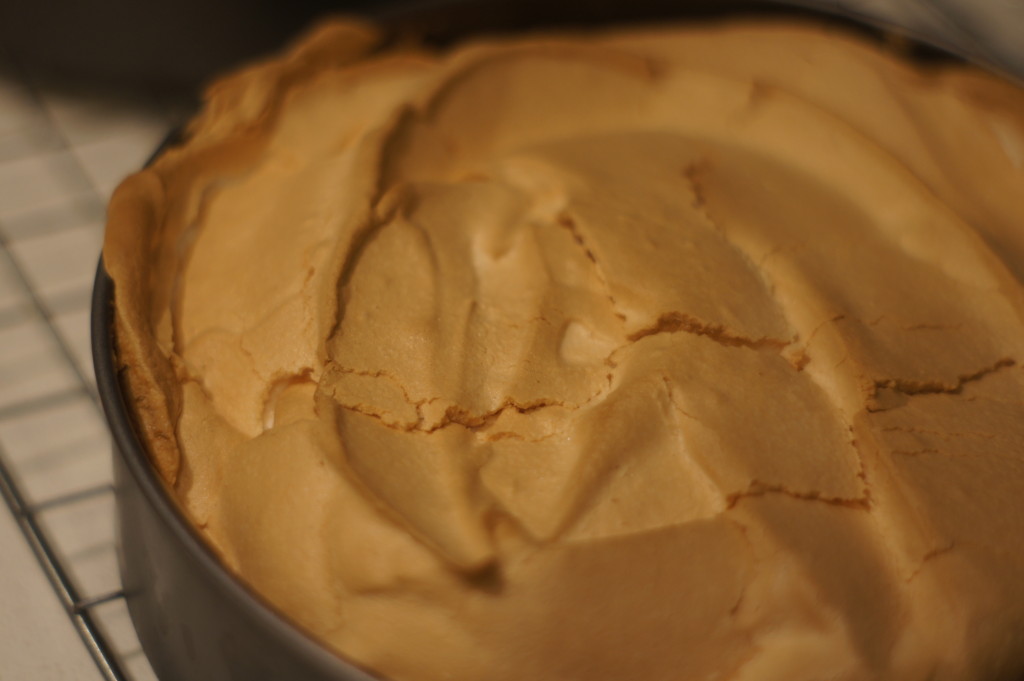 7) Remove the flat-topped meringue on to a cake stand or plate, meringue side down.
8) Whisk the double cream until thick but not stiff and set aside. Spread the flat sponge surface of the first, waiting, cake with the lemon curd and than spatula over the cream and top with the remaining cake, meringue uppermost.