Somehow last week I became the proud mummy of three year old twins. They’re the reason I haven’t posted on here in an extremely long time but I hope to rectify that as Mr Birdie bought me a 6 month Bakedin baking subscription for Christmas so I’m hoping to get back to baking (although now with 2 eager assistants helping me!) When I asked the girls what they would like for a birthday cake, I was expecting answers along the lines of ‘Peppa Pig’, ‘Hey Duggee’ or ‘Paw Patrol’ – all current favourites in our house but instead was told that ‘yellow’ and ‘strawberry’ were required! I knew I wouldn’t have time to make 2 separate cakes (or enough people to eat 2 separate cakes) so it was time to get Pinterest-ing to find some ideas. In the end I decided that some kind of strawberry cake with yellow icing would probably be the best bet. Luckily, I then stumbled across this Tesco recipe for a Neapolitan layer cake which I thought would make a good option with some added yellow icing and some strawberries on top.

This was baked in quite a rush on a Friday night (after a long day at work) and then hastily iced and decorated in between opening presents and attending a birthday party on the morning of the girl’s birthday. There was a lot of sugar, butter and sprinkles involved but in the end I was pretty happy with the results and my harshest (and most important) critics were pretty pleased, I think they’re might even have been a ‘Wow Mummy, that’s amazing!’ I added some glitzy accessories to the top including a cake topper which came from TrulyHappySupplies on Etsy. I ordered one from them for the girl’s first birthday and was really pleased again. You’ll need 3 18cm tins for this recipe. I made some extra icing to completely cover the cake in yellow icing after crumb coating the cake. I also didn’t use a tube of gel colour but instead used some other pink gel food colouring that I already had. With hindsight I should have added some more as I felt the pink could have been a little more vibrant. You can freeze these cakes should you wish to get ahead. Bake the cakes according to the recipe but stop before adding decoration or icing. Allow them cool completely, wrap well in clingfilm and tin foil (to prevent freezer burn) and freeze for up to 3 months. To defrost loosen the tin foil and clingfilm but leave to defrost in packaging at room temperature for several hours before serving.

As I baked this in a rush there aren’t as many photos as I’d usually post. Apologies for this – hopefully normal service will be resumed for me next post!

Method:
1) Preheat your oven to Gas 4/180°C/fan 160°C. Grease and line 3 x 18cm round tins.
2) In a blender, purée 100g of the strawberries, then remove the pips by passing through a fine sieve. Set aside. (Depending on what your blender is like I actually found that using a hand held stick blender was easier). 3) Using an electric hand whisk, beat 180g of the butter until smooth. Add the caster sugar and 1 teaspoon vanilla extract and beat until light and fluffy, then beat in half the buttermilk. 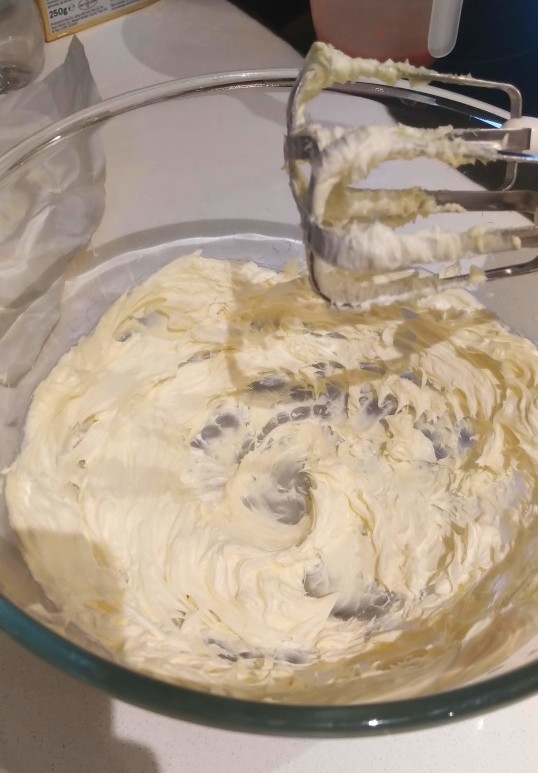 Beat the butter until smooth 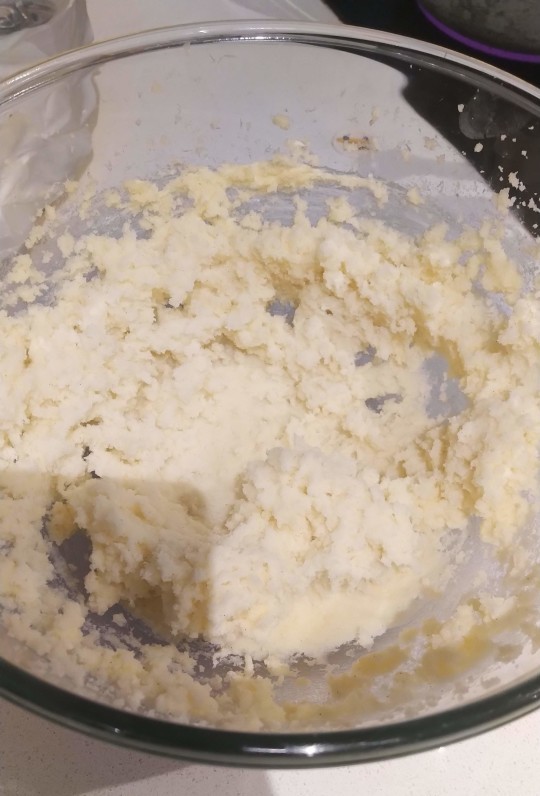 Add the caster sugar and beat until fluffy 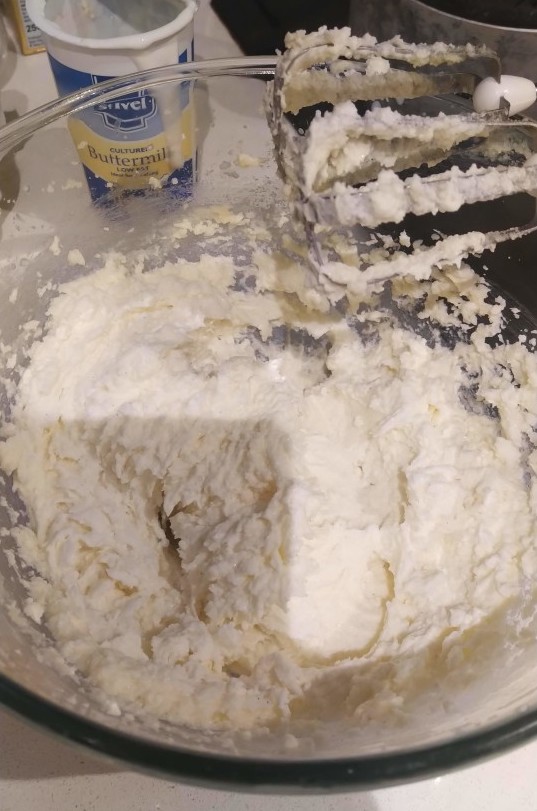 Beat in half the buttermilk

4) Add the eggs one at a time, beating well, then fold through the flour and bicarbonate of soda. Stir in the remaining buttermilk. 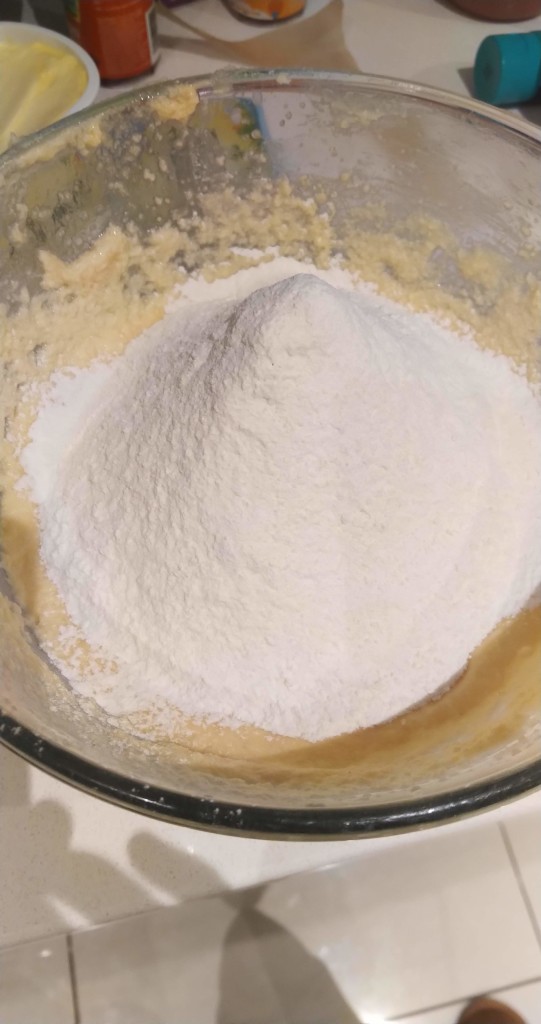 Fold in the flour and bicarbonate of soda 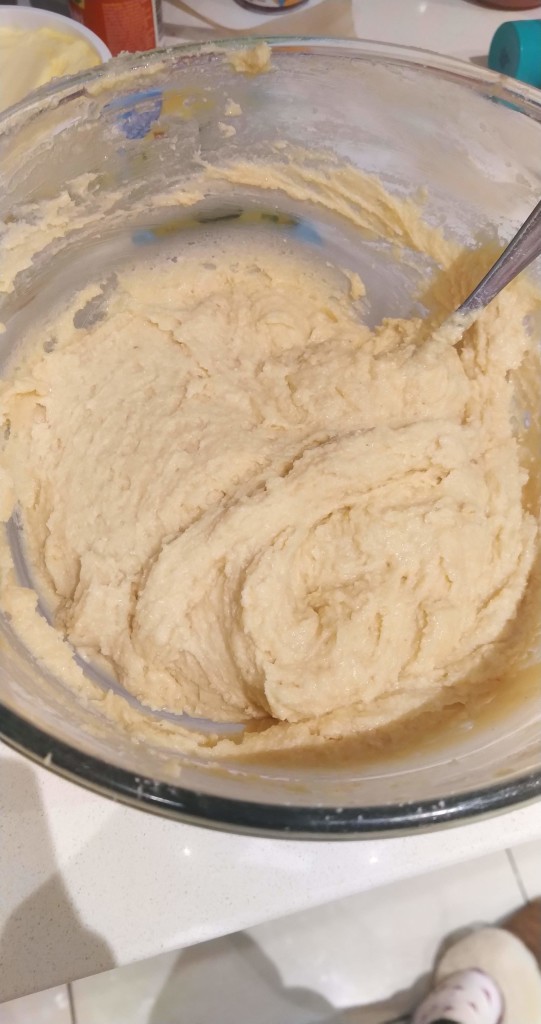 5) Divide the batter between 3 bowls. Fold the melted chocolate into one bowl, and 1 teaspoon vanilla extract into the second. Mix the strawberry purée and pink food colour into the third. Pour the batters into the 3 lined tins. Bake for 20-25 minutes, until a skewer comes out clean. 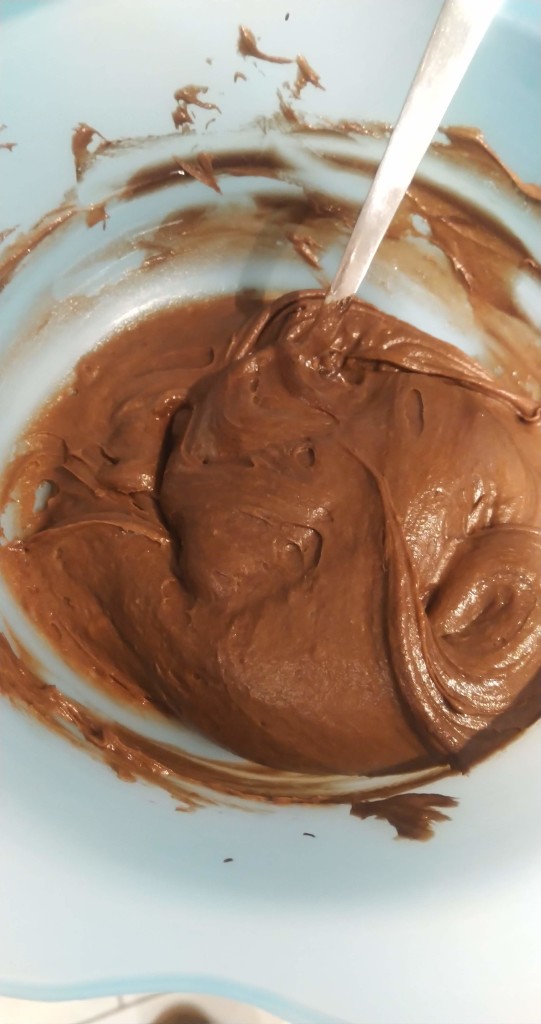 Fold through the melted chocolate 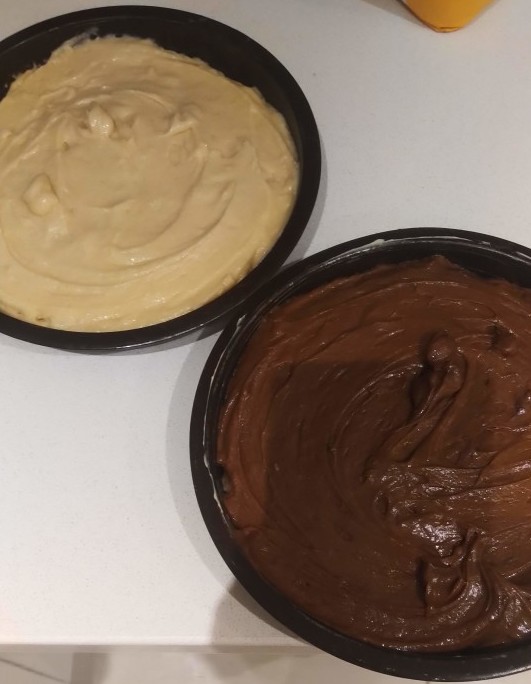 6) Once the cakes are cooked (check using a skewer) allow them to cool completely before adding any icing.
7) To make the buttercream, whisk together the icing sugar, the butter, vanilla extract and 6 tablespoons milk, until it reaches a smooth spreading consistency. Add an extra 1 tablespoon of milk if necessary.
8) Level the sponges using a serrated knife, then sandwich the cakes together by spreading 200g buttercream between each layer, with the chocolate sponge on the base, the vanilla sponge in the middle and the strawberry sponge at the top.
9) Using a palette knife, coat the cake with the remaining buttercream. Sweep around the cake with a palette knife held at a 45 degree angle to remove the excess icing and reveal the sponge beneath. You could leave the cake like this and decorate with grated chocolate and remaining strawberries.
10) Alternatively allow the crumb coating of icing to set before add further buttercream coloured in your choice of colour and then top with strawberries, biscuits, meringues, chocolate etc. 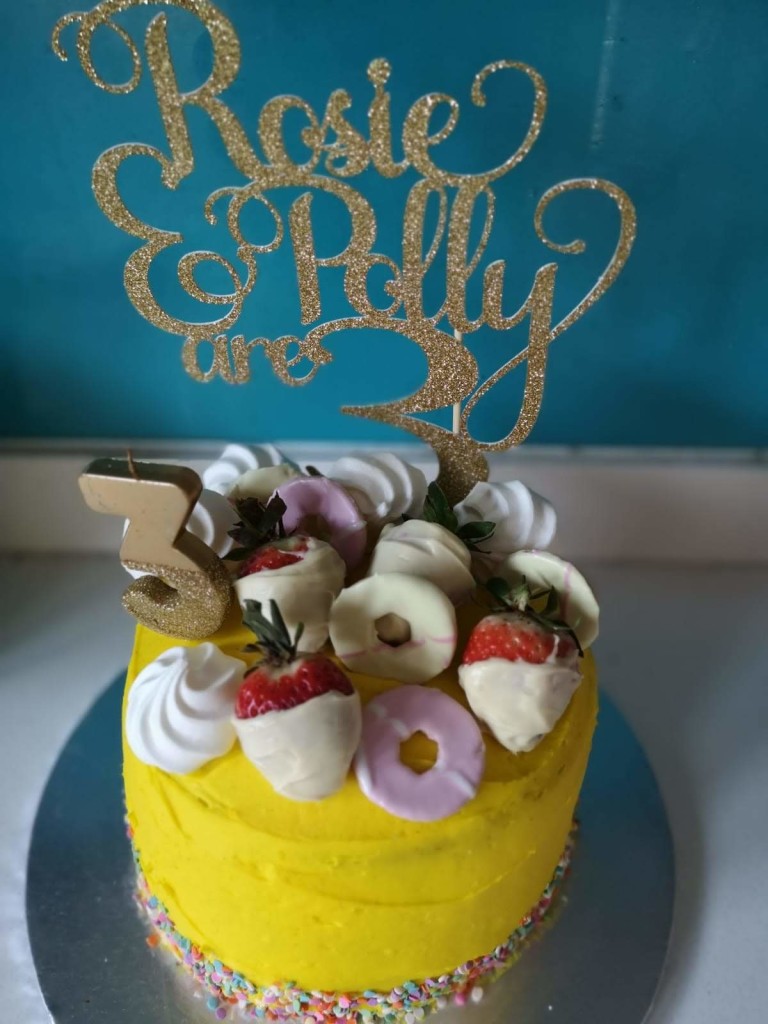 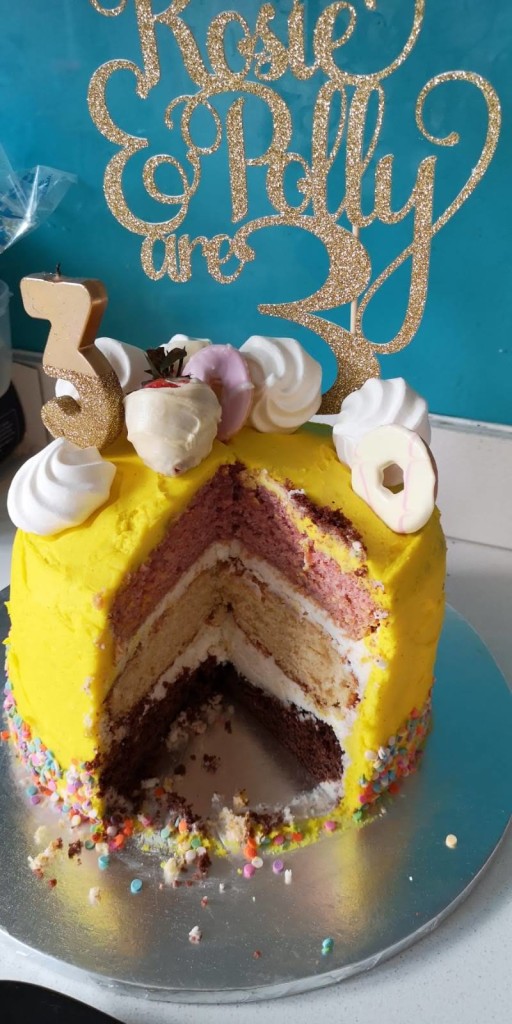 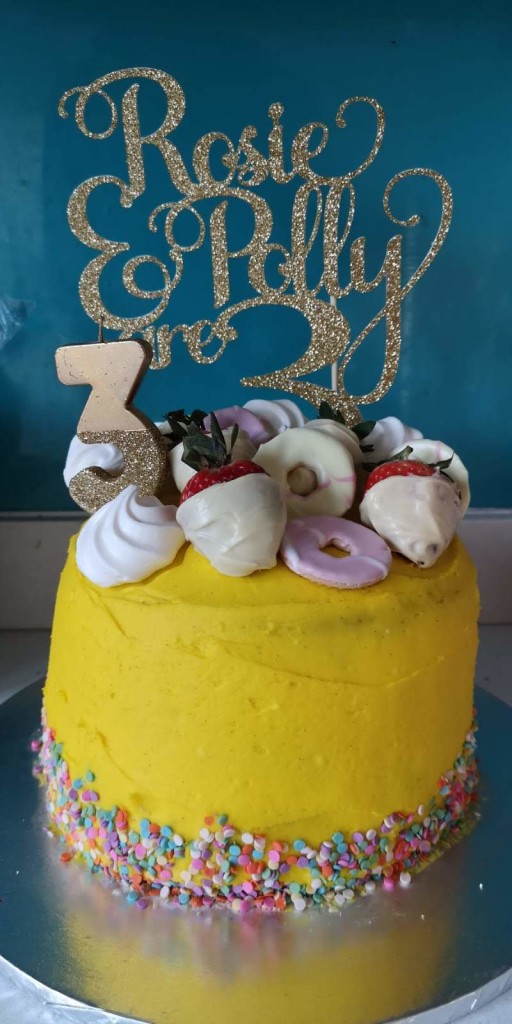