Our friends Simon & Louisa came round for lunch today (accompanied by their super cute son Finn). Following on from my carrot cake post where I was using up some carrots I was given at work I also had some pears that needed using. I decided to opt for Jo Wheatley’s Chocolate & Pear Torte from her ‘Home Baking’ book. You can find the recipe online here. I had considered this BBC Good Food flourless chocolate and pear cake and this BBC Good Food squidgy pear and hazelnut spread cake but I find Jo’s recipes easy to follow and that they produce good results.

This torte will serve 8-10. You will need a 25cm springform or loose-bottomed cake tin that you have lightly greased. For the syrup:
250ml water
60g caster sugar
peel of half an orange

Method:
1) Preheat your oven to 170C/325F/Gas 3. Lightly grease your cake tin.
2) Put the water, caster sugar and orange peel in a saucepan and bring to the boil (stirring to dissolve the sugar). Add the pears, cover the pan with a lid and simmer for 5-10 minutes until just softened (this will depend on the ripeness of your pears). 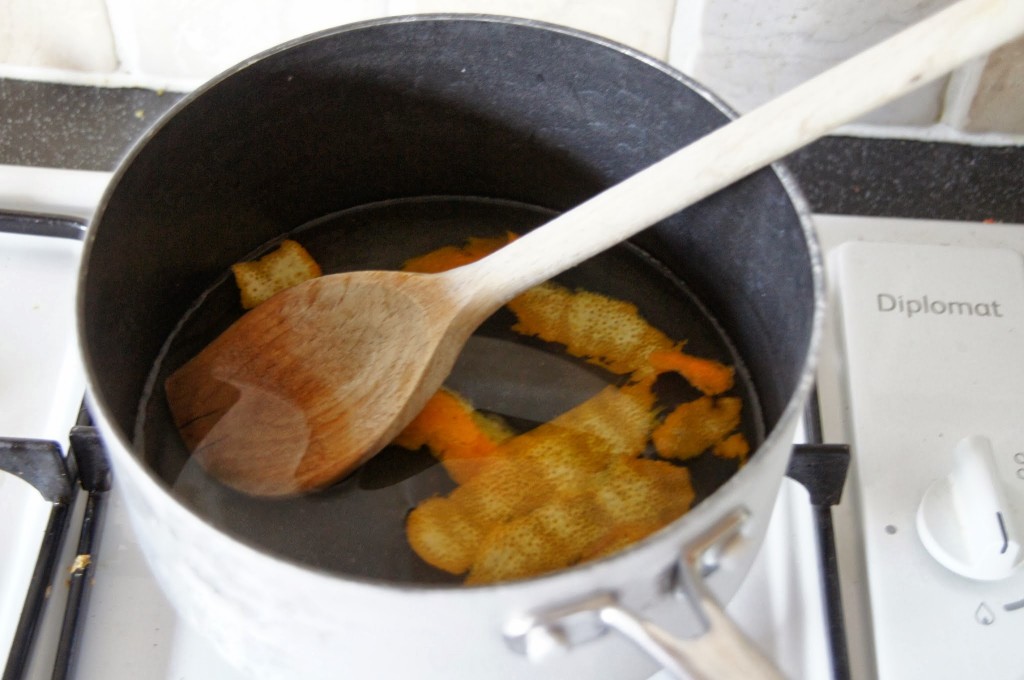 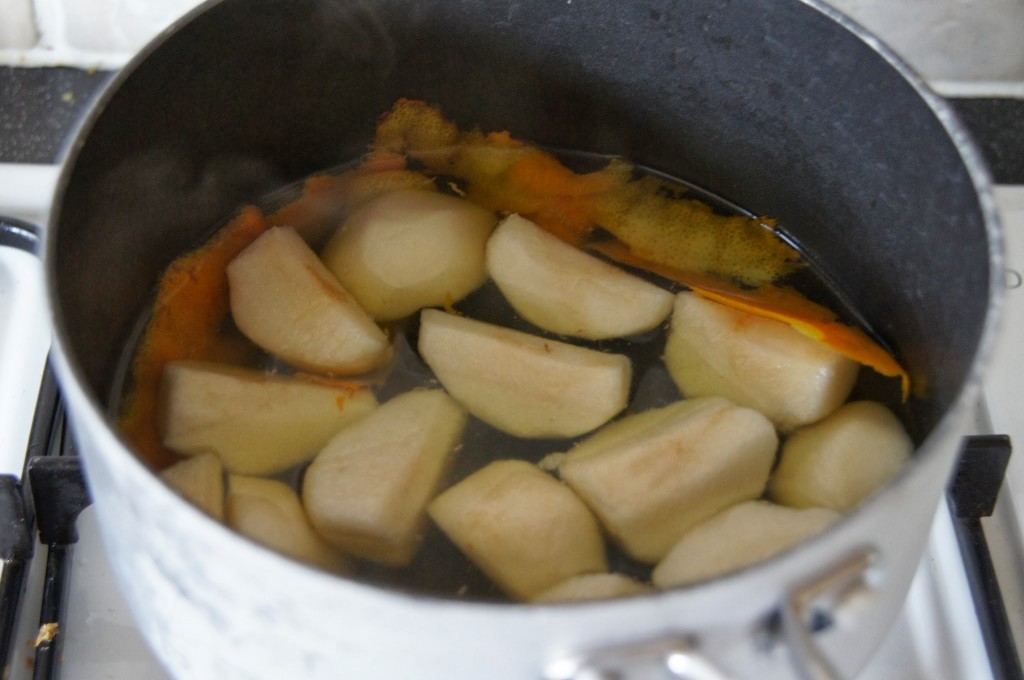 3) After the pears have cooked, remove them from the saucepan using a slotted spoon. Leave them to cool. Continue to cook the poaching liquid (with the lid off) until has reduced by half and is thick and syrupy. Set aside. 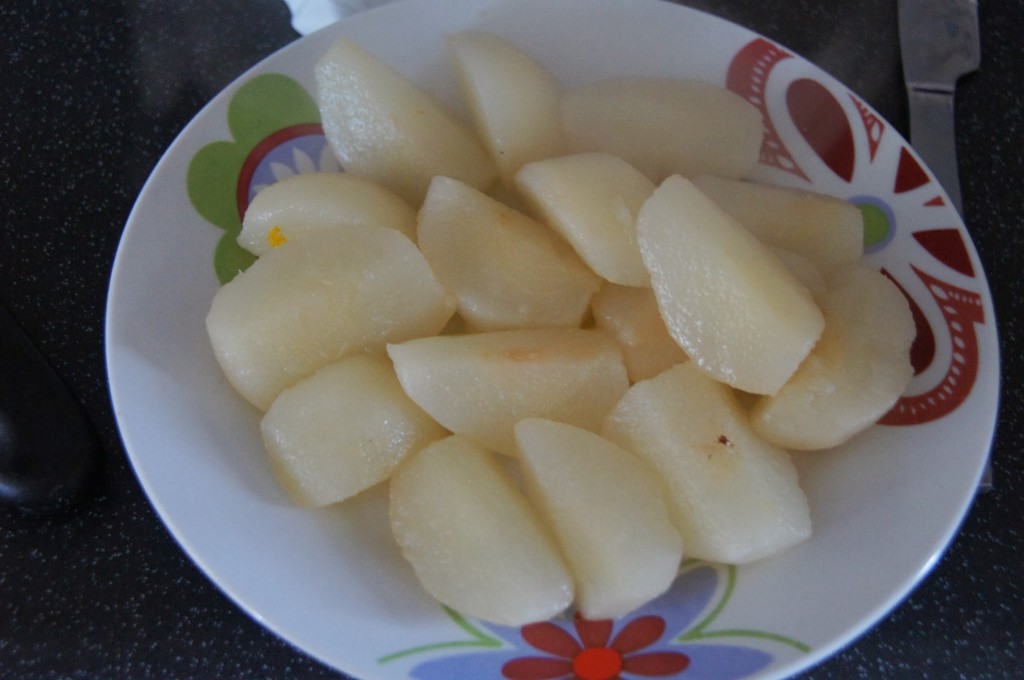 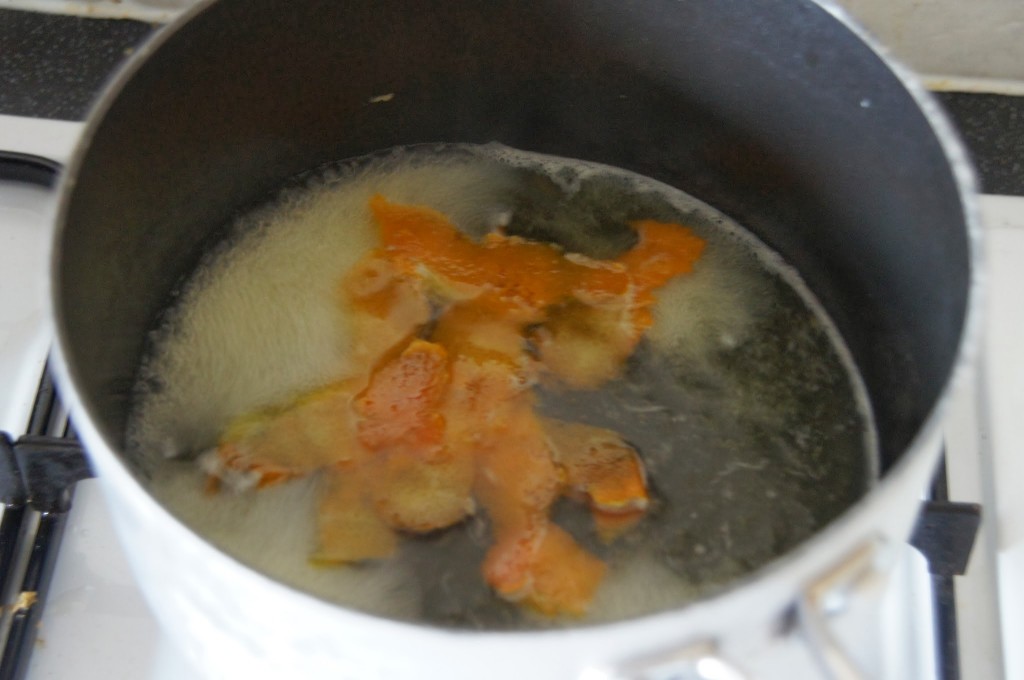 4) Melt the chocolate and butter together in a heatproof bowl over a pan of barely simmering water. Stir until smooth and remove from the heat. 5) Whisk the egg whites until they reach stiff peaks. 6) In a separate bowl, whisk the yolks and sugar together until pale, light and fluffy. Using a metal spoon fold in the almonds, salt and vanilla (I was worried at this point as the mixture became very thick but don’t worry – just try not to knock too much of the air out of it.) 7) Add a spoonful of the egg white mixture and beat it in to loosen the mixture, before carefully folding in the remaining whites. Then fold in the melted chocolate and butter. 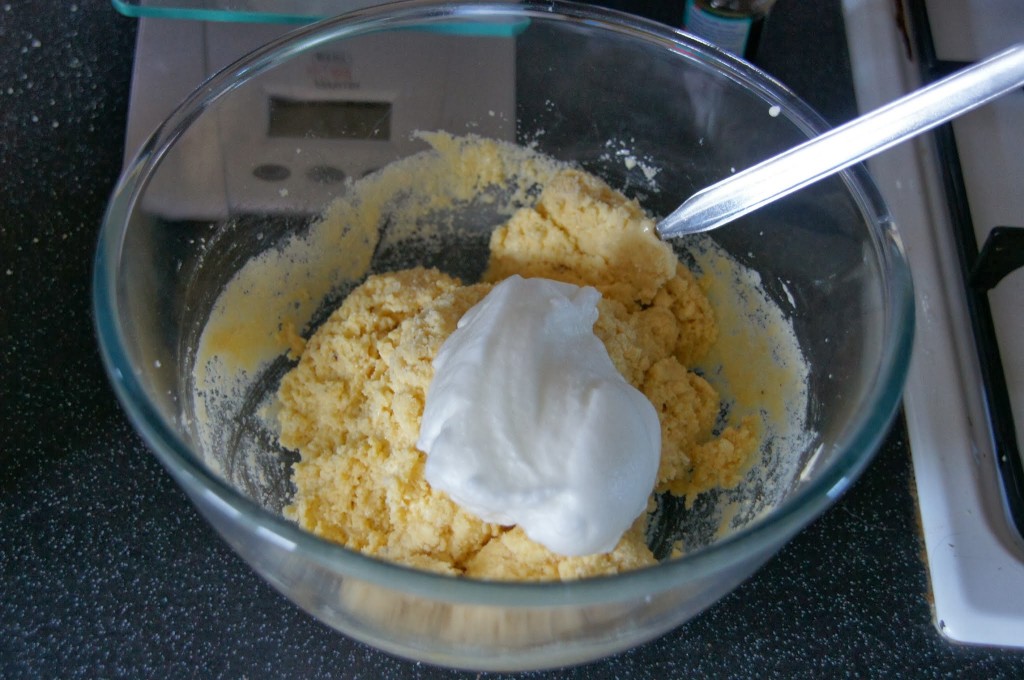 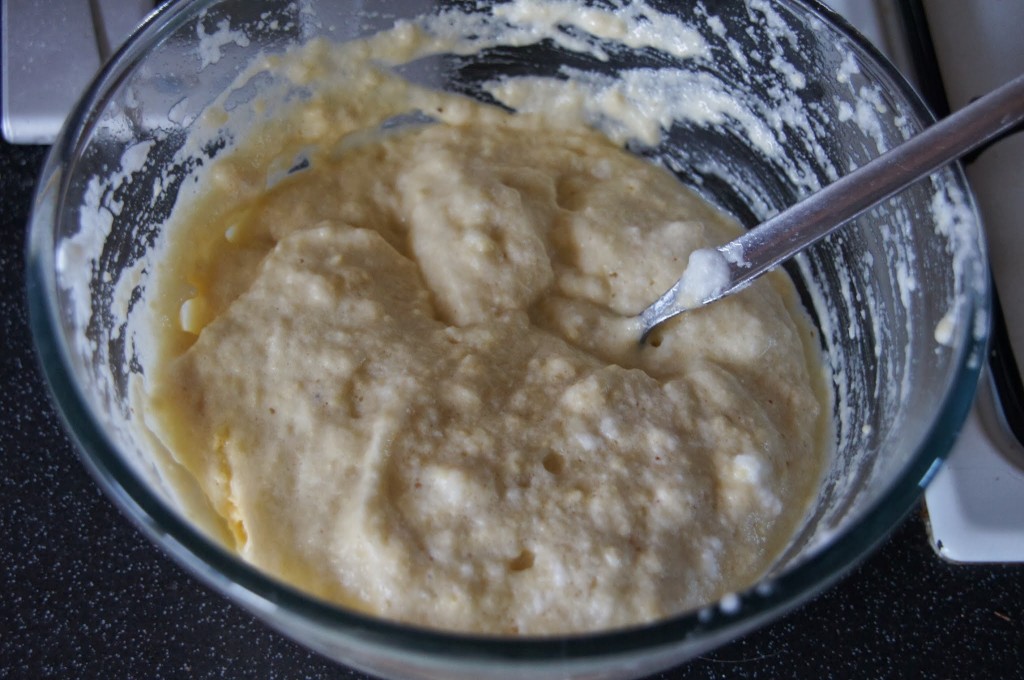 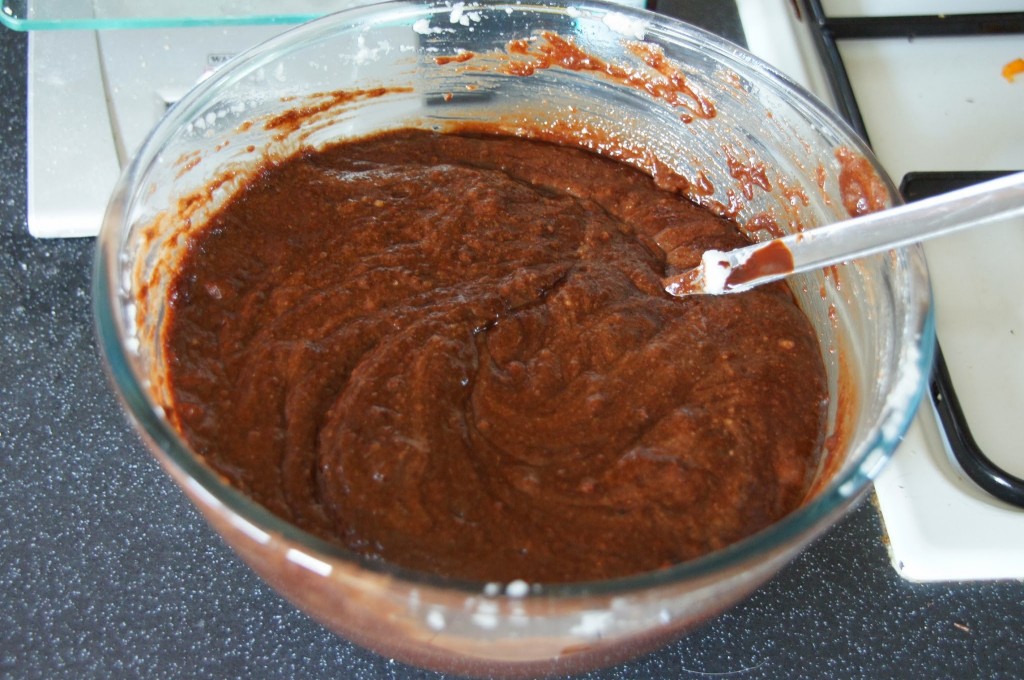 8) Pour the mixture into your prepared tin and push the quartered pears into the batter in a circular shape (as mine were so small I made two circles – one on the outside and one in the middle.) 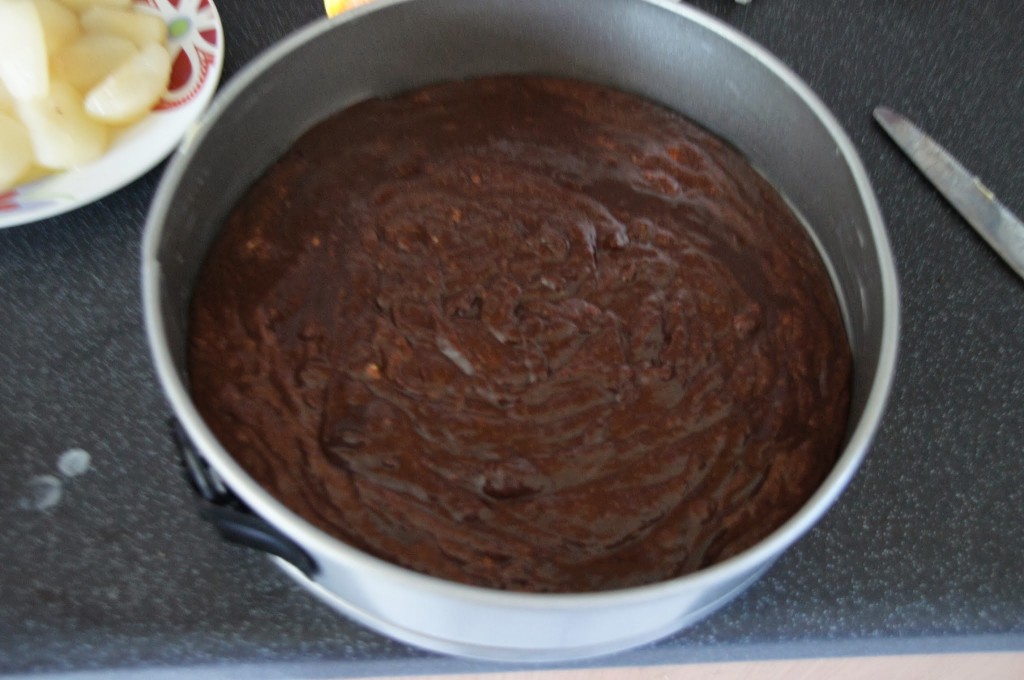 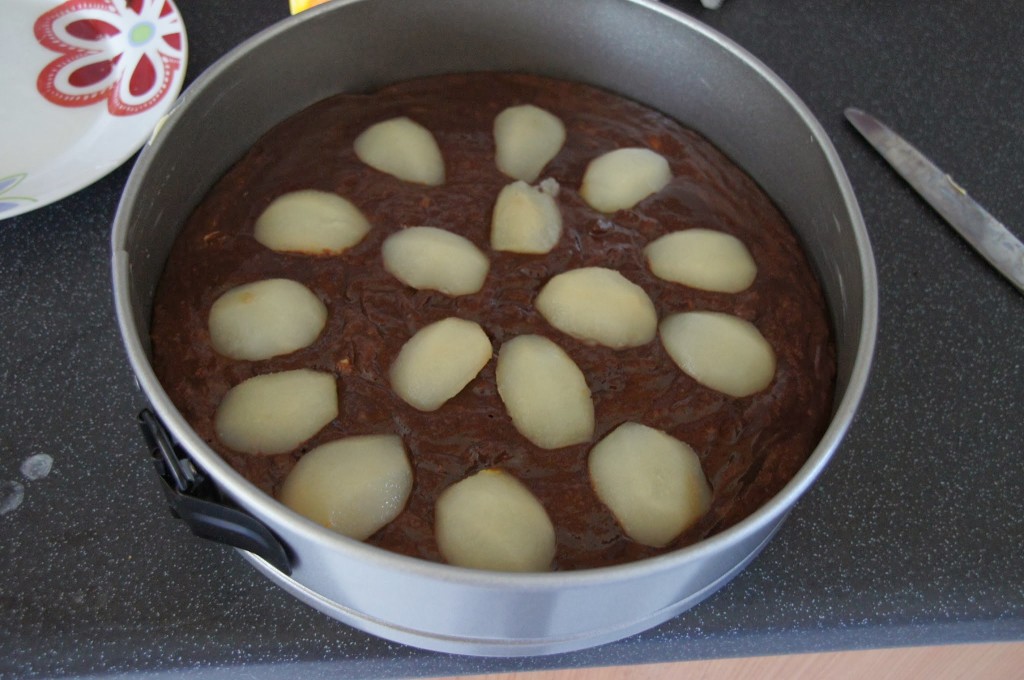 9) Bake on the middle shelf of the preheated oven for 25-35 minutes until it starts to come away from the sides of the tin (mine took a little big longer than this – about 45 minutes as although it was cooked around the outside it wasn’t in the middle – it ended being a little bit over done on the edges though.)
10) Once cooked and removed from the oven, run a palette knife around the sides of the tin and remove from the ring from the tin (but not the base.) Leave the torte to cool completely on a rack. Once cool, chill for a minimum of 2 hours before sliding off the base onto a plate. 11) Brush with the reduce pear syrup and serve (with cream if you’re feeling indulgent!) 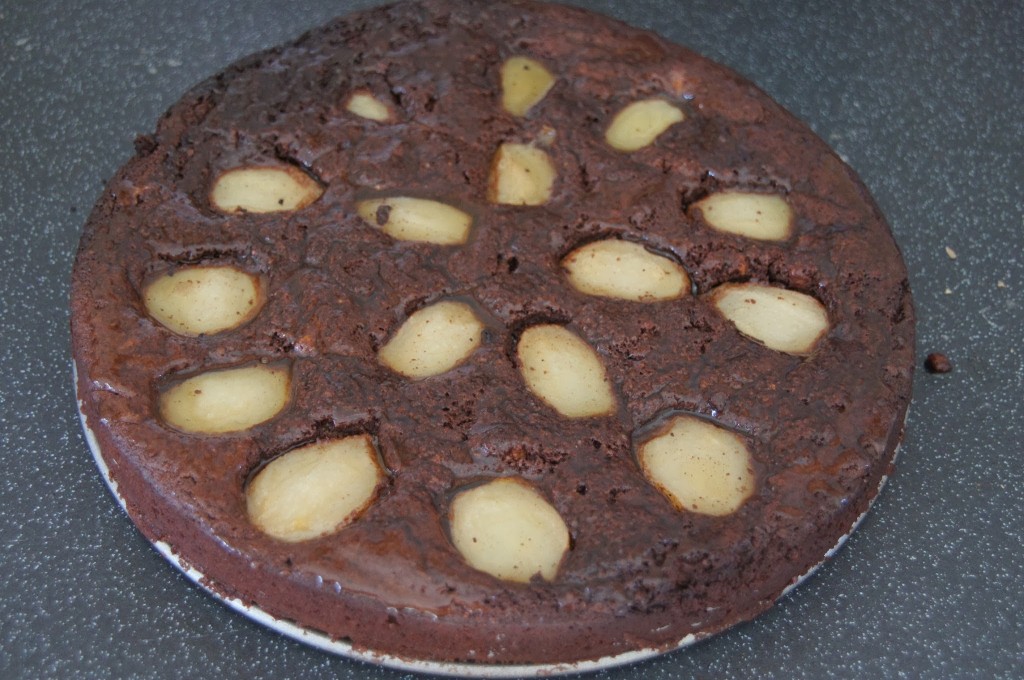 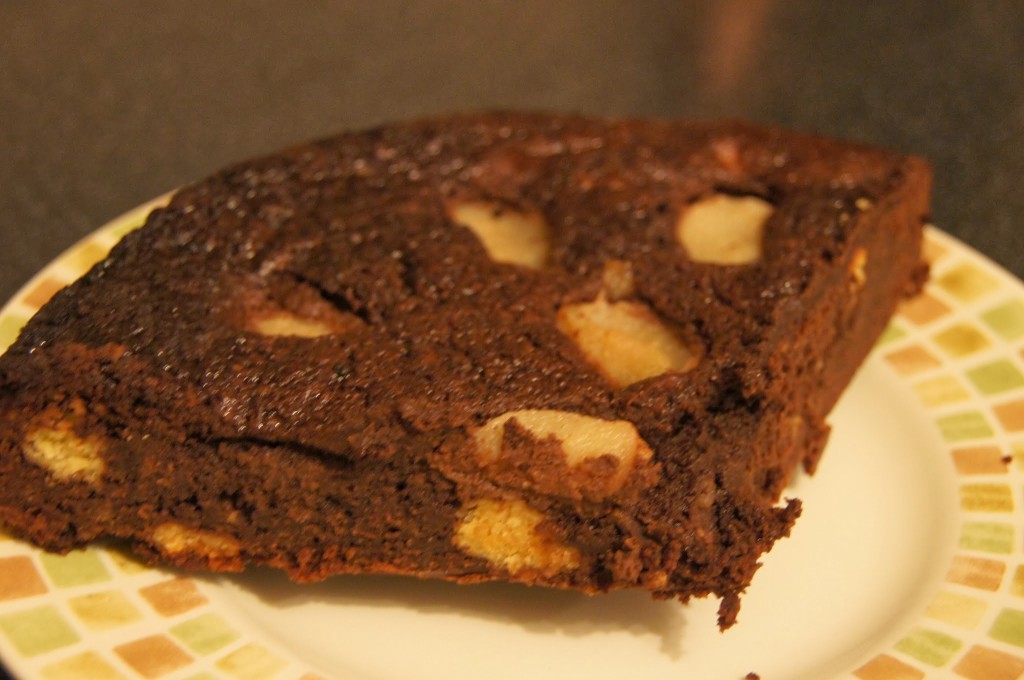