About a month ago I was asked if I could make a Minion cake for the 3rd birthday of Finn, the son of one of my friends. ‘Of course!’ was my reply followed by ‘How about a 3D one?’ I was thrilled and honoured to be asked and knew this was an important task. After quite a bit of research I had a basic idea of what I wanted to do. Luckily, Pinterest and YouTube are full of tutorials. I collected them altogether on a Pinterest board that you can find here. There are lots of different versions. I opted to cover my Minion in buttercream rather than fondant as I’m not overly familiar or confident in working with fondant and then decided to go for a single eye along with some arms and some overalls. I was amazed at how well it turned out given that I’ve never tried anything like this before.

You will need several different colours of fondant for making the features of your Minion. You can choose to buy white fondant and then colour them using paste/gel colourings or buy ready coloured fondant. I decided to opt for colouring white fondant myself which was more time consuming but means you don’t end up with coloured fondant icing you then might not use. I used just under half a 1kg packet.

I achieved my Minion’s domed head by purchasing and using a Lakeland hemisphere pan. If you have a similar shaped ovenproof dish you can of course use an alternative. I opted for the medium 6¼ inch sized one which worked well. I then used 6 inch deep cake tins sliced in half, (again from Lakeland) to bake the body and needed 3 of these in total. You could of course use 15cm sandwich tins to make things easier (you will need six in total).

After checking if Finn would prefer chocolate or plain sponge it was to be chocolate sponge with chocolate buttercream. I decided to use Jo Wheatley’s chocolate birthday cake recipe from ‘A Passion for Baking’ as it always receives fantastic comments about it on Twitter. I did have a trial run during the week before but due to parent’s evening at work only got as far as baking the sponges and covering them in buttercream. It was useful though as I discovered that I would need double the quantity of chocolate cake mix to make my Minion big enough.

This is not a cake that can be quickly whipped up. I made the chocolate cakes the day before and then left the rest of the decorating until the next day. Covering the cake with buttercream and creating the fondant features took around five hours so you need to leave yourself plenty of time. Had I not been going out the evening before I would have covered the cake in buttercream then to allow it time to firm up. Due to my time constraints on the morning of the party I’m afraid there aren’t any photos of the fondant features as I was concentrating so much I forgot to take any!

The finished cake received some lovely comments and was quite a talking point at the party. People were even taking photos of it! I was very proud of it and it has definitely given me the confidence to try something a little more adventurous in the future. Method:
1) Preheat the oven to 180C/160C fan/350F/Gas 4. Grease the sides of your round cake tins and line the base. Thoroughly grease your domed dish or tin.
2) In a bowl of a free-standing mixer, cream the butter and sugar together until pale, light and fluffy. Gradually add the beaten eggs and vanilla extract. 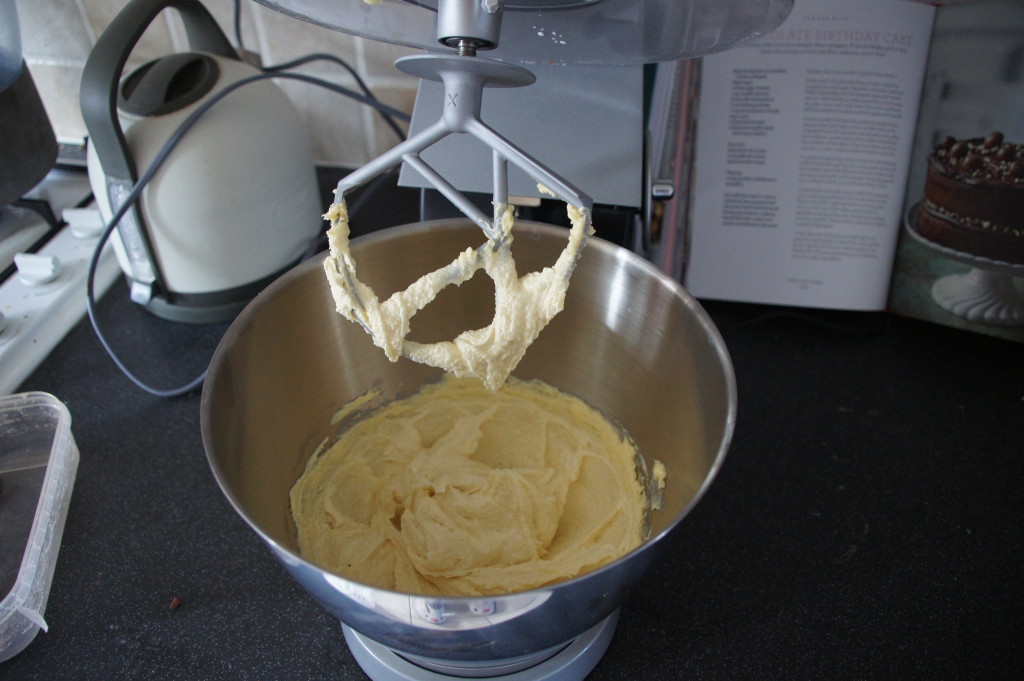 Cream together the butter and sugar 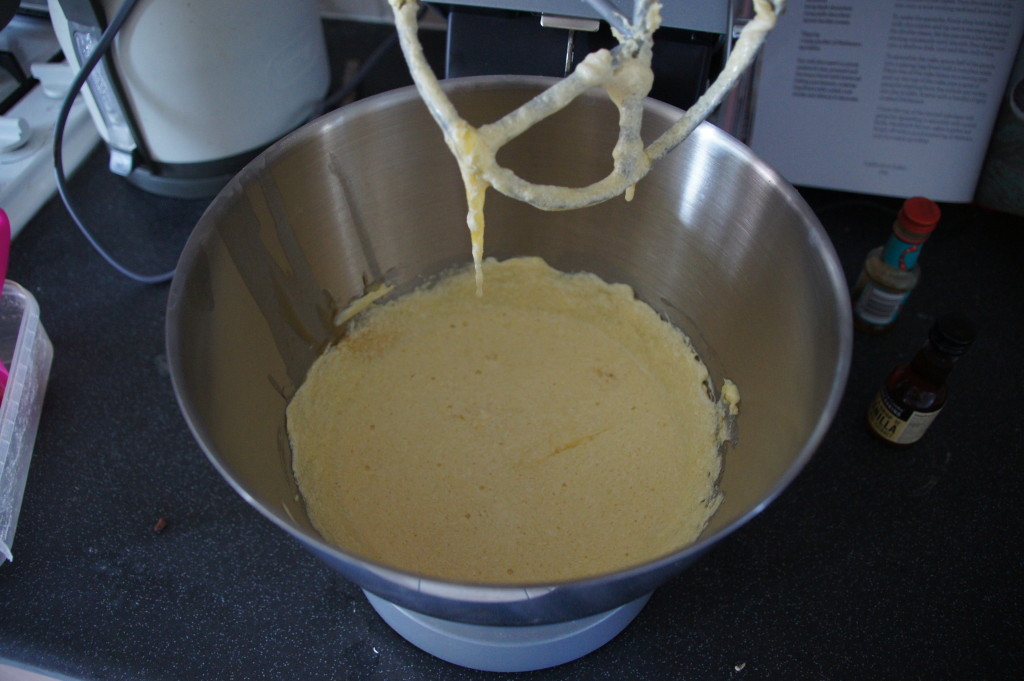 3) Add the flour, baking powder, bicarbonate of soda, cocoa and milk, then mix until combined. Add the melted chocolate and mix again until smooth. 3) Decide which cakes you are going to bake first. Divide equally between the prepared cake tins (I used one lot of mixture for my hemisphere cake tin and one 6in cake tin and then used the second mixture for two 6in cake tins). Spread level and bake on the middle shelf of the preheated oven for about 22-25 minutes (if using sandwich tins) until golden and a skewer comes away clean when inserted into the middle of the cakes. If using deeper tins your cakes will take longer – mine took about 40 minutes. Turn the cakes out of the tins onto a wire cooling rack and leave until cold.
4) Whilst your cakes are cooling make your chocolate buttercream. Beat the butter in the bowl of a free-standing mixer until smooth (alternatively you can use a hand-held mixer). Gradually add the icing sugar and milk and beat on a slow speed to combine. Add the melted dark chocolate and beat for 10 minutes until soft and light.
5) Place your cakes onto a cake board (I used an 8 inch one) or a serving plate. Slice each of your 6in deep cakes in half and using your chocolate buttercream layer the cakes on top of each other until you have created your Minion shape (or if using sandwich tins simply sandwich these together with your buttercream). 6) Make your plain buttercream in the same way as the chocolate buttercream (but without adding the melted chocolate). Use this to ‘crumb cut’ your Minion cake. This is a thin layer of buttercream that helps keep the cake moist and helps prevent any crumbs from showing when the cake is covered in the yellow buttercream. Smooth the buttercream to create as smooth a surface as possible. Place the cake in the fridge to allow the crumb coat to set. 7) Once your crumb coat has firmed up cover your cake in yellow buttercream. I used a spatula to try and make it as neat as possible – you can use an icing smoother if you have one.
8) Then you can start making your fondant features. I began by making the goggle strap. Using your black fondant roll out a thin, long piece that will fit around your cake. Using a knife and a ruler cut this so that it is the same width along the whole piece. Wrap this around your the top of your cake, underneath the dome. Using your leftover black fondant roll some long, thin sausage shapes to create some strands of hair. Roll one more sausage shape to create the mouth. Leave these to harden a little.
9) Next create your eye. Roll out a small piece of white fondant. Using circular cutters cut a large white circle. Then using a slightly smaller cutter cut another circle inside this. Use the smaller circle to create your eye. I then used the leftover ring to create part of the goggle but brushing it with silver lustre dust. To create the inside of the eye cut a small brown circle from fondant (I found a piping nozzle to be just the right size for this) and roll a small piece of black fondant to go inside this. Using edible glue, glue the pieces of your eye together and leave them to set. Once they have firmed up a little you can attach them to the goggle strap using edible glue. 10) To make your Minions overalls roll a thin strip of blue fondant (similar in size to the strip used for the goggle strap). Use a knife and ruler to cut it so it is the same length. Wrap this around the bottom of your cake. Then cut a square to create the front of the overalls. Attach this to the front of you cake using edible glue. Then you need to create the overall straps. Roll out two thin straps and cut them so they are both the same widths. Attach from the back of your cake (just underneath the goggle strap) and bring them to the front of your cake, attaching them at the top of the square. Using a cocktail stick or cake modelling tool create small indents along the straps and along the square to look like stitching detail. Using some black fondant create to small buttons and attach these using edible glue.
11) At this point you are nearly finished! Create the arms of your Minion by rolling two sausages of yellow fondant. Shape the hands using a cake modelling tool – I created three indents to look like fingers. Bend the arms in to fit to the cake and then attach them using edible glue.
12) To finish your cake you need to create your Minion’s mouth. Attach the mouth created earlier to the right of your Minion’s eye. Using a small piece of pink fondant create a tongue and place this above the mouth. 13) Celebrate the fact your cake is finished. Step back and admire your work! 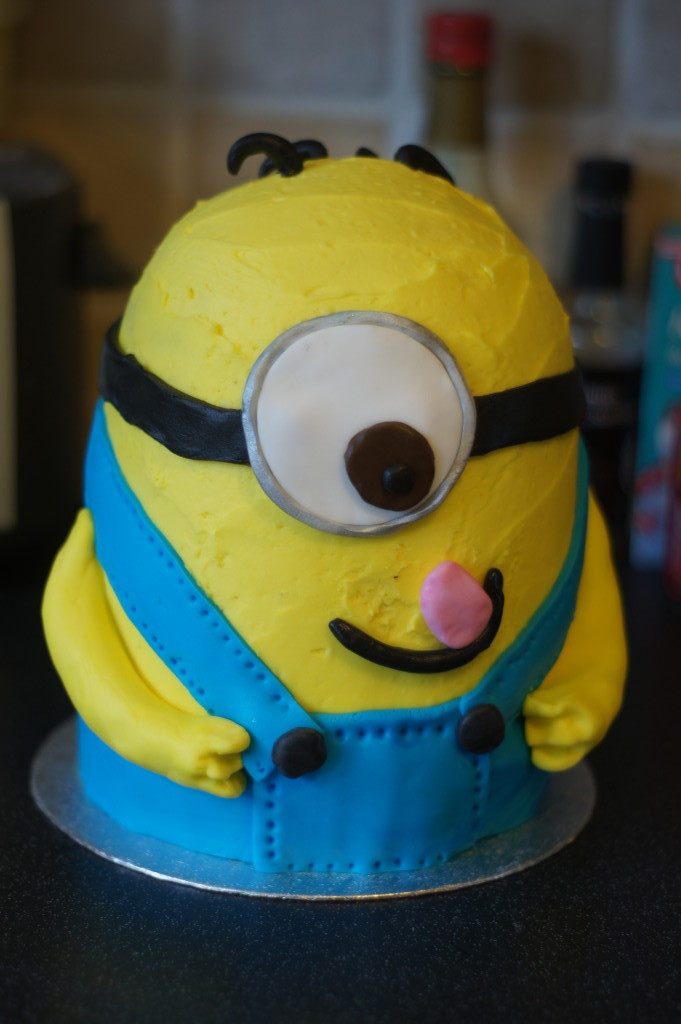 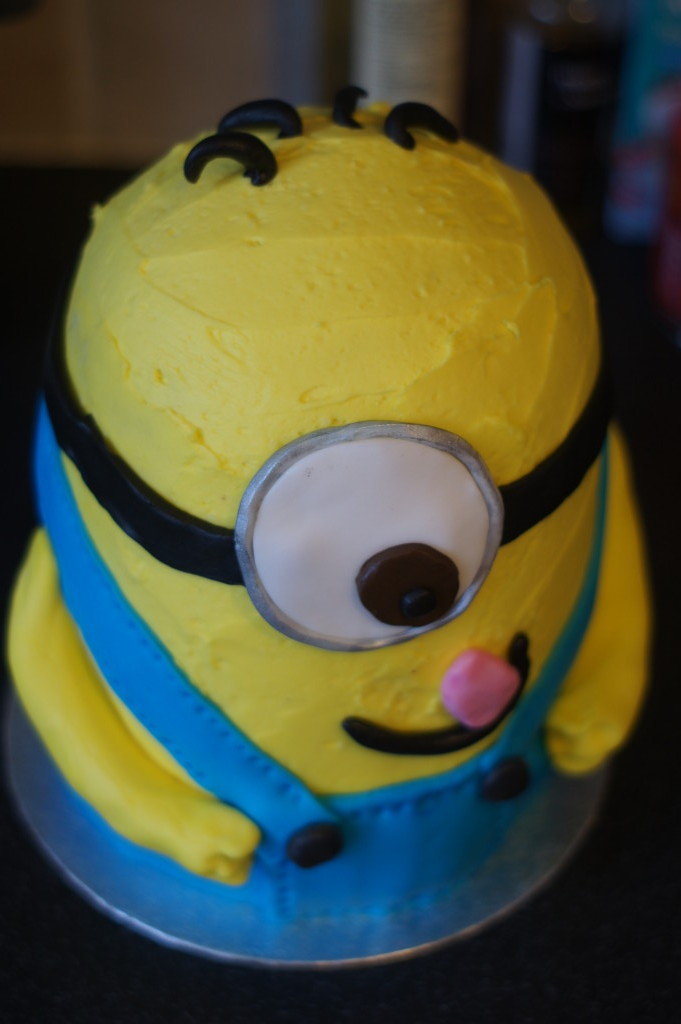