Today was a special day. You might have seen ‘The Big Reunion’ on the TV (lots of pop bands from the late nineties and early noughties reuniting) – well today was the proper big reunion. It is ten years this summer since I and my very special friends graduated from university. In honour of this special occasion we had a get together to reminisce, laugh over photos (what were we wearing?!?) and partake in a game of petanque. I of course offered to make dessert. I’d had my eye on this recipe for a while and recently had a similar cake at ‘The Tenth Hole Tea Rooms’ in Southsea (they are legendary in Hampshire for their amazing cakes!) so decided now was the time. I am now a little bit obsessed with the idea of making meringue cakes and have my eye on a Nigella Lawson lemon meringue cake, a BBC Good Food blackberry and almond meringue cake and a mocha meringue cake I have found on a blog. Oh the possibilities!

As you will see from the photos I have yet again failed in my attempts to make a meringue that does not crack! I am obviously just doomed. However despite appearances the cake went down well. It is a Miranda Gore-Brown recipe from the Great British Bake Off. You can find it on lots of different websites but I used the version from the BBC website that you can find here. It is very tricky to slice and serve and does not look pretty but makes up for it in taste. The combination of meringue and brownie works well and the raspberry cream adds some freshness. There was a debate over the hazelnuts in the meringue but the end decision was that they add texture. The recipe is meant to use two 23cm sandwich tins which I don’t possess so I used springform tins instead which still works.

Method:
1) Preheat the oven to 190C/375F/Gas 5. Grease and line two 23cm sandwich tins.
2) For the brownie base, melt 180g of the chocolate in a bowl and set over a pan of simmering water. Chop the remaining chocolate and set aside. 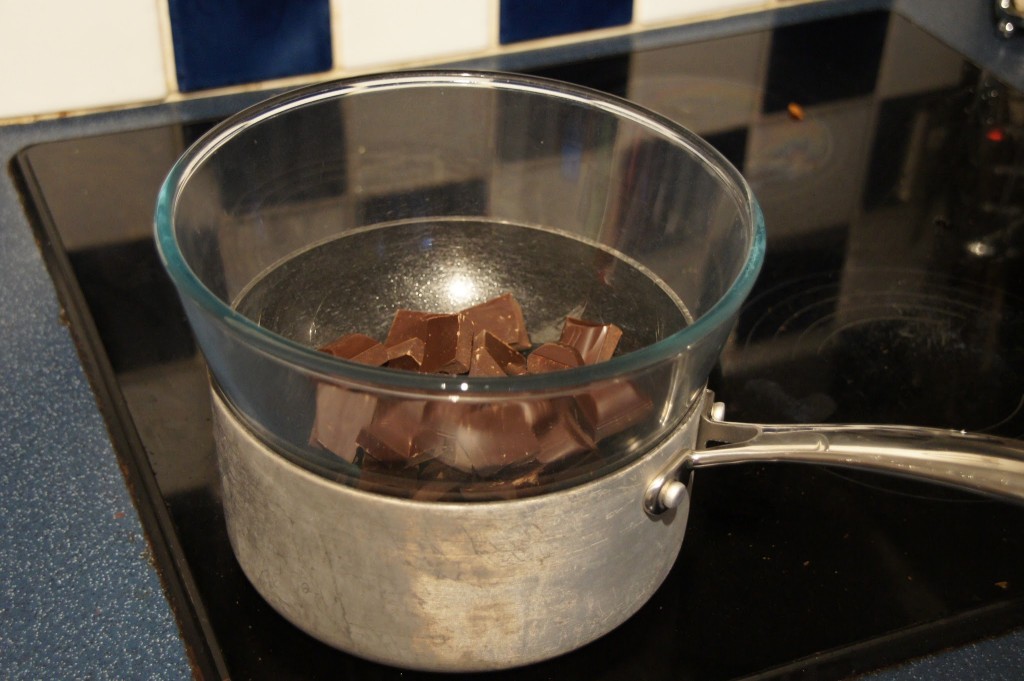 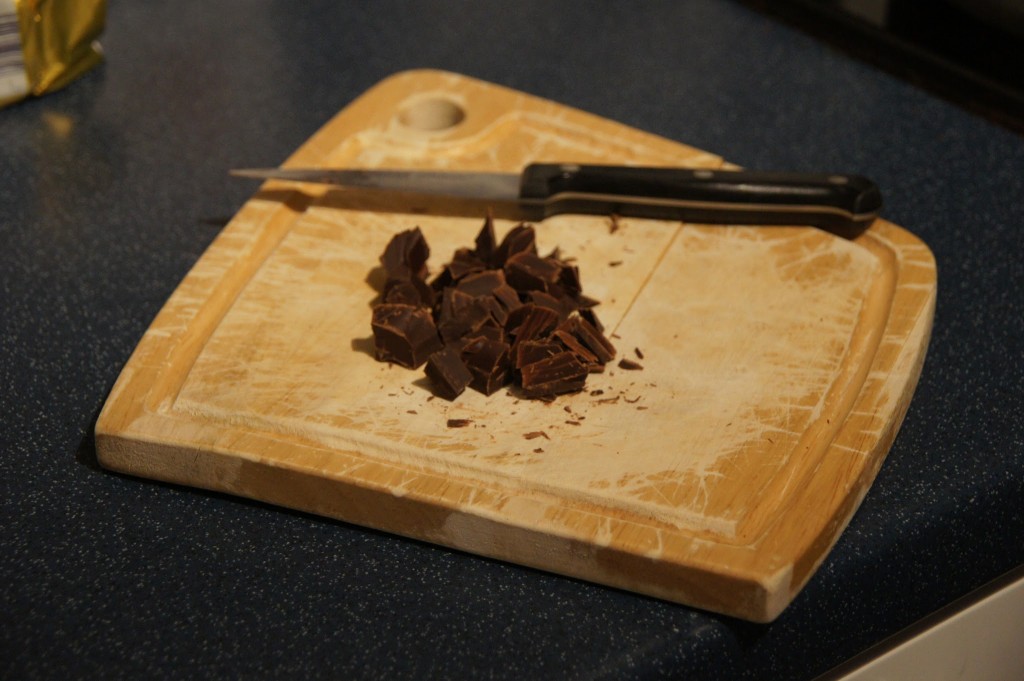 3) Meanwhile, cream the butter and icing sugar together in a separate bowl until light, creamy and fluffy. Slowly whisk in the eggs, one at a time, until well combined (the mixture will look a little bit odd at this point but don’t worry!) 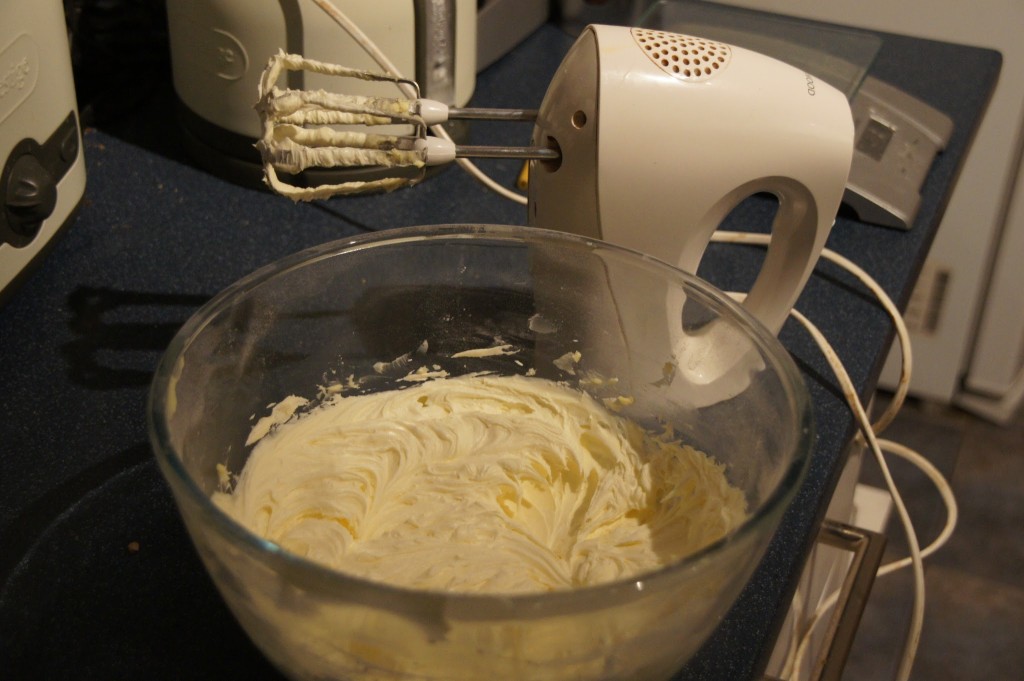 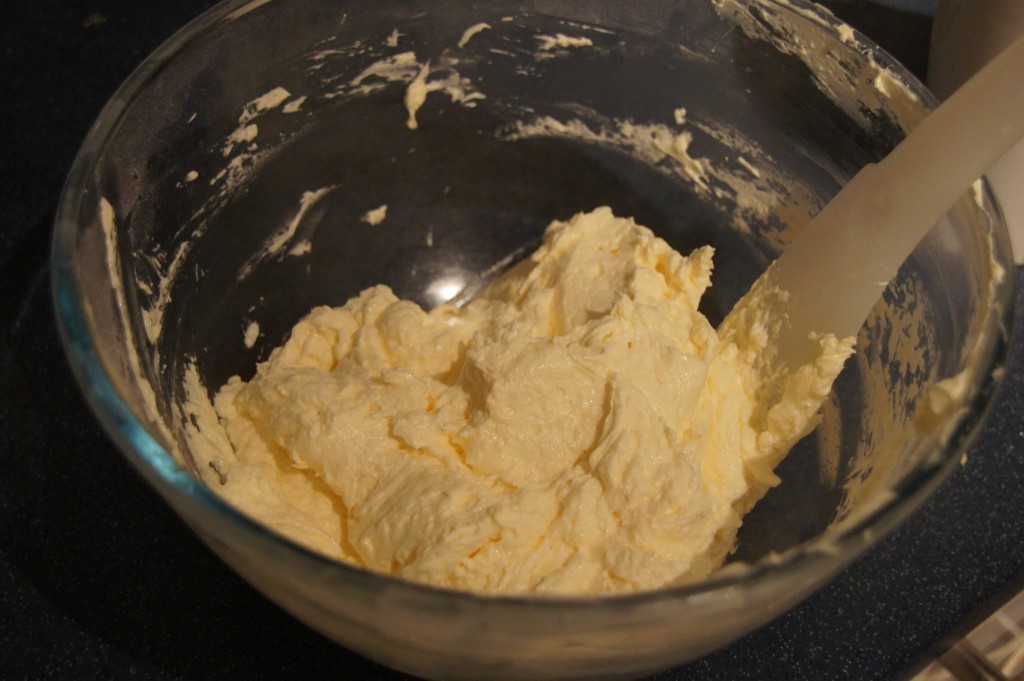 4) Gradually beat in the flour until the mixture is very smooth. Slowly pour in the melted chocolate and fold it into the mixture, then fold in the chopped chocolate. 5) Pour the brownie mixture into the prepared sandwich tins and bake for 10-12 minutes. Reduce the oven temperature to 170C/325F/Gas 3. 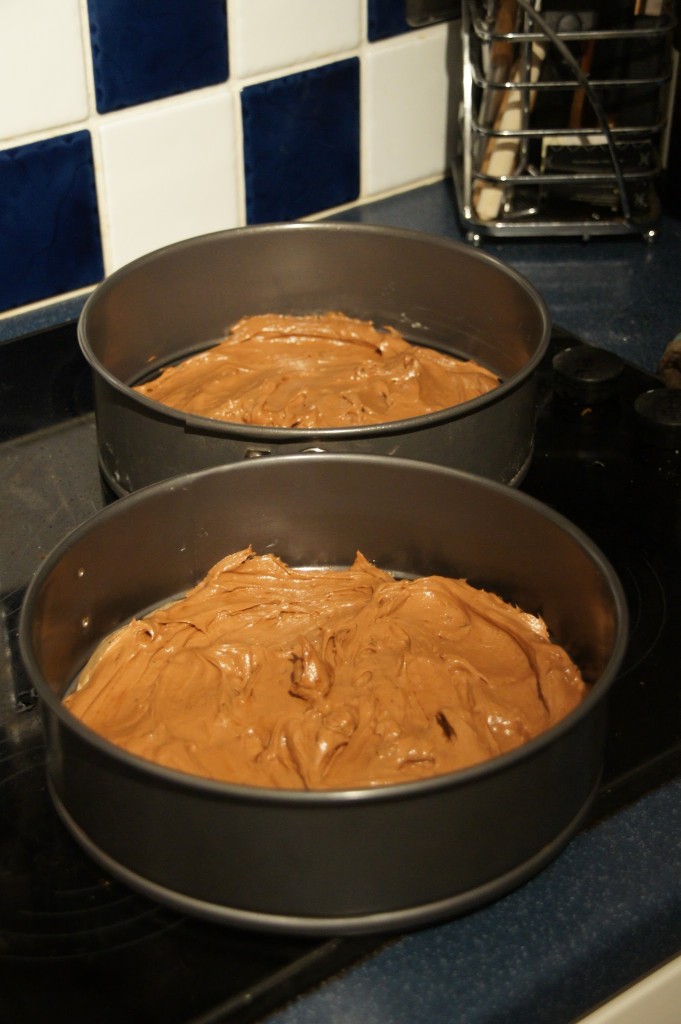 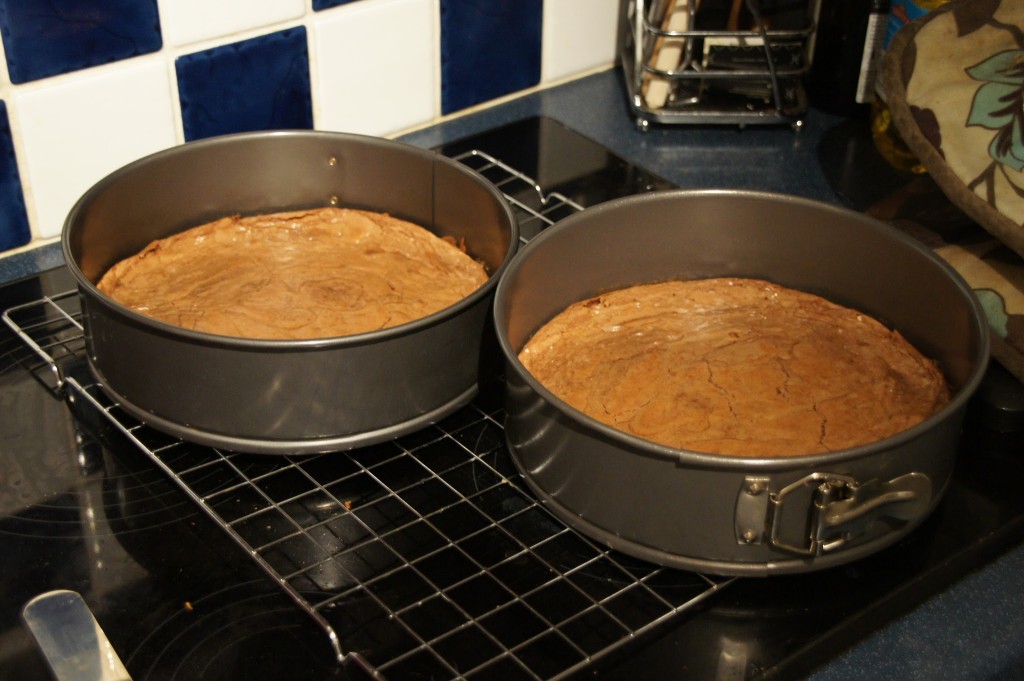 6) Meanwhile for the meringue topping, whisk the egg whites and cream of tartar in a bowl until soft peaks form when the whisk is removed (I think I probably stopped whisking a little bit too early and should have carried on a little longer). Slowly which the sugar until smooth and glossy, then fold in the chopped hazelnuts with a metal spoon. 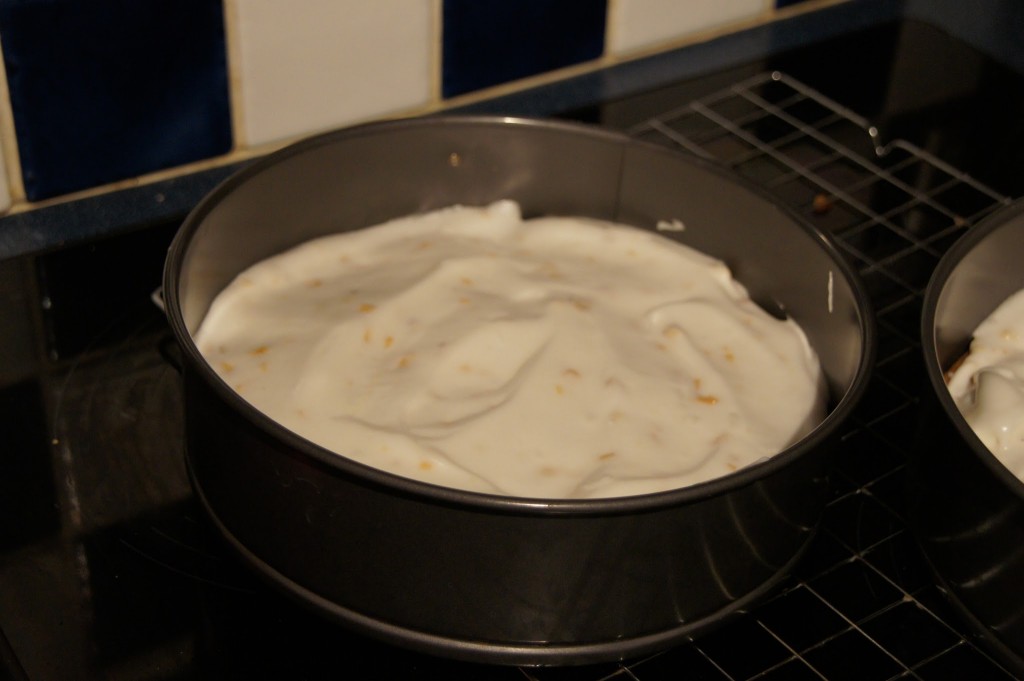 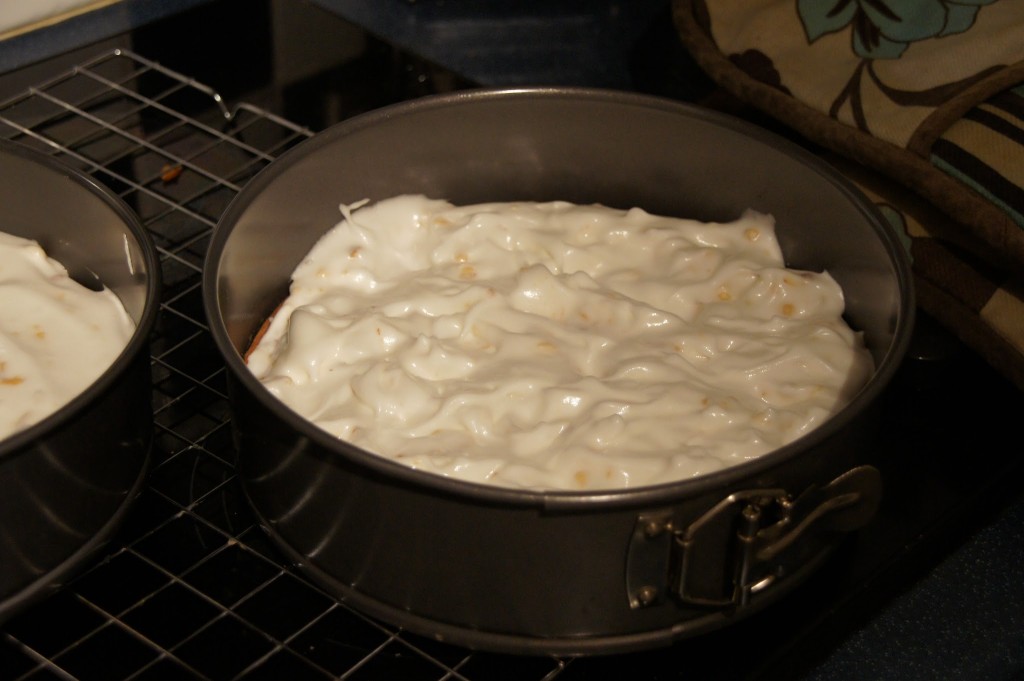 8) Return the sandwich tins to the oven for a further 30 minutes, or until the meringue is golden-brown (I check mine just after 20 minutes and they were ready then.) Remove from the oven and set aside to cool. Carefully remove the cakes from the tin and set aside to cool completely on a wire rack.
9) For the filling, whip the cream and icing sugar together in a bowl until stiff peaks form when the whisk is removed (again I think I failed in my whisking here!) Fold in the raspberries. 10) To assemble, place the flat meringue brownie, meringue-side down onto a cake stand or large plate, spoon over the raspberry cream and top with the remaining cake, brownie-side down (this is tricky – this is where my cracking took place). As an optional extra you can sprinkle over chopped hazelnuts and pistachios.